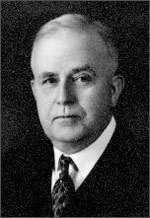 Frank Curry Mathers was born in Bloomington, Indiana on February 11, 1881. He received an A.B. degree in 1903 at Indiana University. He continued on as an instructor, at the same time doing graduate work in electroplating with Dr. O. W. Brown for the M.A. degree in 1905. He then took leave of absence to go to Cornell University where he received the Ph.D. degree in 1907 in inorganic chemistry with Dr. L. M. Dennis. He took all of Dr. Wilder D. Bancroft’s courses and carried out some laboratory work with him. After this training, Dr. Mathers was ready to begin a career in electrochemistry. He rejoined the staff at Indiana University in 1907 as an assistant professor of inorganic chemistry. He was made an associate professor in 1923. In 1946-1947, he was interim head of the Department of Chemistry. He was made emeritus professor in 1950.

Dr. Mathers attended his first Society meeting at St. Louis in the fall of 1904 and became a member the same year. He first became officially active in the affairs of the Society in 1917 when he was made a member of the Technical Committee on Electroplating in the days before the Electrodeposition Division was created. He was elected President of the Society in 1940. He was a member of Alpha Chi Sigma, Phi Lamda Upsilon, and Sigma Xi.

Dr. Mathers devoted his life to teaching and research. His first research was on electroplating lead from perchlorate solutions. This work was published in The Electrochemical Society Transactions in 1910. He continued working on electrodeposition of metals from perchloric solutions. During the first World War, he was asked to come to Washington to prepare fluorine by Dr. Bancroft who was then a Major in the chemical Warfare Service. Dr. Mathers designed a cell which was named after him. It produced fluorine by electrolysis of potassium hydrogen fluoride. A modification of his process was used to make fluorine for the preparation of uranium fluoride for the atomic reactor. Most of his research carried out independently and with his students was on electroplating. He developed a process for the plating of tin and found that aluminum could be plated successfully from a bath of aluminum halides and aromatic hydrocarbons. He authored more than 130 papers in the Transactions of the Society. In additions to his academic work, he spent many summers working in industry.

Dr. Mathers was characterized as an excellent and demanding teacher, considerate of students who did there best but very hard on those who did not. In addition to chemistry, he expected his students to keep abreast of national affairs and it was not uncommon for him to ask them about happenings in Congress.