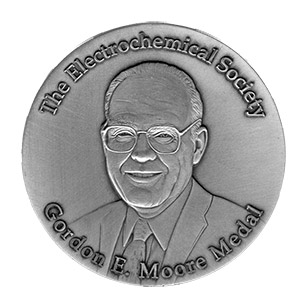 This award was established in 1971 as the Solid State Science and Technology Award for distinguished contributions to the field of solid state science and technology. In 2005, the award was renamed in honor of Gordon E. Moore.

The recipient will have made outstanding contributions to the fundamental understanding and technological applications of solid state materials, phenomena, and processes. The recipient does not need to be a member of The Electrochemical Society.

The award consists of a silver medal and a plaque that contains a replica thereof, both bearing the name of the recipient, the sum of $7,500, complimentary meeting registration for award recipient and companion, a dinner held in recipient’s honor during the designated meeting, and Life Membership in The Society. The recipient will receive the award in person at the designated Society meeting and deliver a general address on a subject related to the contributions for which the award is being presented.

Gordon E. Moore is the co-founder and chairman of the Intel Corporation. He established what is now known as Moore’s law: the observation that the number of transistors per square inch on integrated circuits had doubled every year since the integrated circuit was invented, published in Electronics Magazine in 1965. While originally intended as a rule of thumb in 1965, Moore’s law has become the guiding principle for the industry to deliver ever more powerful semiconductor chips at proportionate decreases in cost.

In a recent interview that ECS conducted with Moore, he said his vision that the number of transistors per chip would double every two years was articulated in public for the very first time at an ECS meeting of the Society’s San Francisco Section in 1964. Read more.