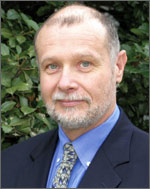 Paul M. Natishan received a B.S. in biology from Wilkes College (1975) and an MS(1979) and Ph.D. (1984) in materials science and engineering from the University of Virginia. His dissertation research was on the use of graphite fiber-polymer matrix composites as electrode materials for the electrochemical disinfection of recirculation fluids. He was awarded a National Research Council Associateship in 1983 to work at the Naval Research Laboratory (NRL) in the area of passivity and localized corrosion. Dr. Natishan joined NRL as a Research Metallurgist in 1985 and he is currently Head of the Corrosion Science Section. His research efforts have included the use of ion beam surface modification techniques to study and improve the passivity of aluminum, paraequilibrium alloying for improved hardness and corrosion resistance, determining the role of chloride ions in oxide film breakdown using X-ray photoelectron spectroscopy and X-ray absorption spectroscopy, inhibition of microbiologically influenced corrosion, and the production and electrochemical uses of diamond and diamond-coated materials. His research efforts have resulted in 79 publications and seven U.S. Patents.

Dr. Natishan has been a member of ECS for 27 years. He became active with the Society as a member and Chair of the National Capital Section’s Executive Committee and subsequently as a member and Chair of the Council of Section’s Executive Committee. Dr. Natishan has served on the Corrosion Division’s Executive Committee, as Chair of the ECS Transactions Charter Committee, as the Alternate Trustee to the Federation of Materials Societies (since 1995), and as a member of most of the standing committees. He was the Society Secretary from 2000 to 2004 and has served on the Board of Directors for eight years. He has organized numerous symposia, and edited several proceedings volumes and the ECS booklet “What Is Electrochemistry?” (1997). Dr. Natishan was the recipient of the National Capital Section’s Blum Award (1996) and Foley Award (1998) and was inducted as a Fellow in 2005. He is currently Senior Vice-President. In addition to his ECS activities, Dr. Natishan was a section editor for the ASM Handbook on Corrosion, an associate editor for Corrosion Journal, and contributed the chapter on “Corrosion and Corrosion Control” in the Kirk-Othmer Encyclopedia of Chemical Technology (1993, revised in 2002). He was the recipient of the 2005 J. Kruger Award (B/W Section of NACE) and was named a Fellow of NACE International in 1998. He has been a member of the Research Committee of NACE International since 1996.