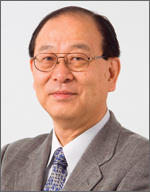 Tetsuya Osaka is a professor in the Department of Applied Chemistry, Faculty of Science and Engineering, Waseda University, Tokyo, Japan, a position he has held since 1986. He currently serves as Director of the Institute for Nanoscience and Nanotechnology, Waseda University.

Prof. Osaka’s recent work is focused on electrochemical nanotechnology, including electro- and electroless-deposition/surface finishing, electronic packaging materials, magnetic storage and energy storage devices, and chemical- and bio-sensors. He has contributed as an author and/or editor to more than 70 books and published more than 890 original and review papers in these fields. He has been identified as one of the Highly Cited Researchers in the Materials Science category on the website of Thomson Scientific’s ISIHighlyCited.com.