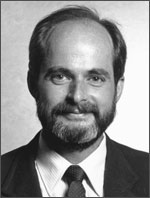 Carlton M. Osburn is professor of electrical and computer engineering at North Carolina State University in Raleigh, North Carolina. From 1983 to 1993, he was also director of advanced semiconductor technology at the Microelectronics Center of North Carolina’s Center for Microelectronic Systems Technologies. At NCSU, he is Director of the Center for Advanced Electronic Materials Processing, where his research interests include deep submicron semiconductor devices, materials, and processing. He received his B.S. degree in engineering sciences and his Ph.D. in electrical engineering from Purdue University, in the area of electroceramics.

In 1970, Osburn joined IBM Research as a research staff member studying the dielectric properties of insulators. At IBM, he was manager of exploratory fabrication technology with responsibility for research studies and fabrication of advanced semiconductor devices including micron and sub-micron structures. In this capacity he was responsible for managing the Yorktown silicon processing facility.

Osburn has published over 130 papers and has 23 patents and patent publications. He received honorable mention as Eta Kappa Nu’s Outstanding Electrical Engineer of the Year in 1975. In that same year, he also received the T. D. Callinan Award from the Dielectric Science and Technology Division of The Electrochemical Society. He received the 1989 Maurice Simpson Award of the Institute of Environmental Sciences and the Electronics Division Award of The Electrochemical Society in 1991.

A Society member for the past 30 years, Osburn is currently a Fellow of The Electrochemical Society and past chairman of the Electronics Division. He has been chairman or served on the organizing committee of numerous Society symposia, including “Ultra Large Scale Integration Science and Technology” and “Semiconductor Silicon.” He is a Fellow of IEEE, and has served on the technical program committee for the Symposium on VLSI Technology. In addition, he is a member of Sigma Xi and has previously served on the Semiconductor Research Corporation’s university advisory board.