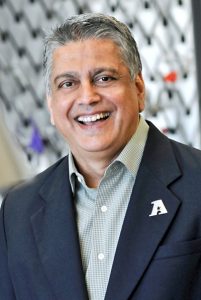 Krishnan Rajeshwar is a Distinguished University Professor at the University of Texas at Arlington.  He is also the founding director of the Center for Renewable Energy Science & Technology (CREST) on campus.  He was president of The Electrochemical Society (2016-2017) and has served as an elected officer. Rajeshwar has served as editor of Interface, the Society’s authoritative yet accessible quarterly publication for those in the field of solid state and electrochemical science and technology.  He has served on the editorial boards of several electrochemical journals.

After post-doctoral training at Colorado State University, he joined UT Arlington in 1983. His research interests span a wide spectrum and include photoelectrochemistry; solar energy conversion; renewable energy; materials chemistry; semiconductor electrochemistry; and environmental chemistry. Rajeshwar is a Fellow of The Electrochemical Society and received the ECS Energy Technology Division Research Award in 2009. He has authored monographs and edited books, special issues of journals, and conference proceedings on energy conversion. He is the author of over 350 refereed and well-cited publications.