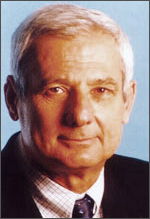 For the term 1988-1991, he was vice-president and president of the International Society of Solid-State Ionics; in 1996-1998, president of the Italian Chemical Society; and since 1989, a member of the Italian Commission of the International Union of Pure and Applied Chemistry (IUPAC). He was elected in 2000 as a vice-president of The Electrochemical Society. In 1997, he received the Research Award of the ECS Battery Division. He is a member (2000-2002) of the Faraday Division of the Council of the Royal Society of Chemistry.

Dr. Scrosati is currently the European editor of the Journal of Power Sources; and is a member of the editorial boards of various international journals, which include Solid State Ionics, Journal of Applied Electrochemistry, Progress in Solid State Chemistry, Ionics, The Chemical Records, and La Chimica e l’Industria. Dr. Scrosati is listed among the ten thousand most cited chemists in the world. He is author of more than 330 scientific publications, 9 books, 10 chapters in books, and 16 patents.