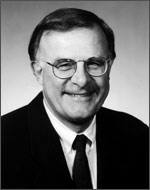 Dr. Spear is a Fellow of The Electrochemical Society and the American Ceramic Society. He received the ECS Solid State Science and Technology Award in 1997, and has been a member of the executive committee of the High Temperature Materials Division for fourteen years, serving all of the officer positions. He has co-organized and co-edited the proceedings of a number of Society symposia and proceedings. He has been a member and chair of many of the Society’s committees, and has been a member of the its Board of Directors for the past six years.

Dr. Spear has authored or co-authored more than 175 publications and three patents, primarily on experimental and theoretical research concerned with the synthesis and chemical behavior of materials at high temperatures. Major research topics have included nuclear fuel materials, metal boride systems, theory and practice of crystal growth and CVD, vapor deposition of diamond, oxidation and corrosion of advanced ceramics, interface reactions in composites, and the thermodynamic modeling of oxide phase diagrams and complex glass systems. A common thread in his research has been the application of high temperature chemistry principles, phase equilibria, and thermodynamics to predict and understand materials behavior. Partial equilibrium concepts used in the thermochemical modeling of dynamically reacting CVD systems were later applied to a wide variety of interface reactions such as those occurring in composite systems, in oxidation and corrosion processes, and in modeling the behavior of glass processing and systems.