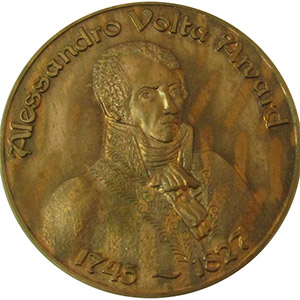 The Europe Section Alessandro Volta Medal was established in 1998 to recognize excellence in electrochemistry and solid state science and technology research.

The recipient will have made outstanding achievements in either electrochemical science or solid state science and technology based on publications and/or technical contributions to these fields.

Nominations shall be made by members of ECS.

The award consists of a silver medal and a US $2,000 prize. The recipient will be invited to deliver the “Volta Award Lecture” during the designated ECS meeting at which the award is presented, on a subject of major interest to him/her. The speech may relate to the citation of the award or to the individual’s current research activity.

Alessandro Volta was an Italian scientist and is internationally recognized as the inventor of electrochemical science and technology. He is credited as the inventor of the electrical battery and as having discovered methane. The SI unit of electric potential, better known as volt, is named after him.