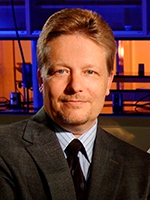 Eric D. Wachsman is Director of the Maryland Energy Innovation Institute at the University of Maryland (UMD) and Crentz Centennial Chair in Energy Research, with appointments as Distinguished University Professor in the Department of Materials Science and Engineering and the Department of Chemical Engineering. His research focuses on solid ion-conducting materials and electrocatalysts, and includes the development of solid oxide fuel cells, solid state batteries, ion-transport membrane reactors, solid state gas sensors; and the electrocatalytic conversion of CH4, CO2, and NOx, using advanced ion conducting materials.

Prof. Wachsman received his PhD in Materials Science & Engineering from Stanford University, and his BS in Chemical Engineering from the University of California, Berkeley. He is the Editor in Chief of Ionics and on the editorial board of Scientific Reports, Energy Systems, and Energy Technology. He has more than 250 publications and 17 patents on ionic and electronic transport in materials, their catalytic properties, and device performance. The US Department of Energy, National Science Foundation, NATO, and the National Academies have invited Prof. Wachsman to serve on panels on fuel cell and hydrogen energy research. The governor of Maryland appointed him to serve on the Board of Directors of the Maryland Clean Energy Center.