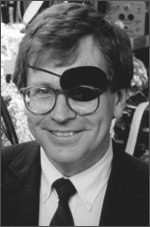 Jerry M. Woodall was born and grew up in Washington, D.C. He attended MIT and received a B.S. degree in Metallurgy in 1960. He earned his Ph.D. degree in Electrical Engineering at Cornell University in 1982.

Dr. Woodall joined Clevite Transistor Products in Waltham, Massachusetts in 1960. In 1962, he joined IBM T. J. Watson Research Center in Yorktown Heights, New York. He studied the chemistry and crystal growth of high purity bulk GaAs. This work resulted in state-of-the-art high purity material used in Gunn effect research. Next he worked on the growth of crystals for injection research and reported the first use of the liquid-phase epitaxial method for fabricating Si-doped p-n junction GaAs LEDs, GaAlAs/GaAs LEDs and lasers. In the late sixties he invented the GaAlAs/GaAs high efficiency solar cell and with co-workers at IBM developed this structure into a high efficiency solar cell.

He studied GaAs surfaces and interfaces with emphasis on the fundamental aspects of the both Schottky barrier and ohmic contacts, and use of photoelectrochemical techniques for device fabrication and surface passivation. He also studied the role of effusion cell chemistry on epitaxial layers grown by molecular beam epitaxial method. He studied the use of new materials for high speed device applications. Dr. Woodall published 121 technical papers and received 64 patents. He received four major IBM Research Division Awards, 27 IBM Invention Achievement Awards.

Dr. Woodall became a Society member in the 1960s. He was active in the Electronics Division serving as Journal Divisional Editor, member of the Executive Committee, and Chairman. He was co-founder of the Energy Technology Group (now a Division). He served on many Society committees. He was elected Vice-President of the Society in 1987 and served as President in the term 1990-1991. He received the 1980 Electronics Division Award, the 1985 Solid State Science and Technology Award, and was elected Fellow of The Electrochemical Society in 1992.

Dr. Woodall received the 1984 IEEE Jack A. Morton Award, the 1988 Heinrich Welker Gold Medal, and the International GaAs Symposium Award. He was elected Fellow of the American Physical Society in 1982, IBM Fellow in 1985, and election to the National Academy of Engineering in 1989. He was active in many other societies and on university review boards.