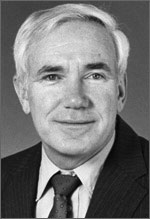 Wayne L. Worrell was born in Rock Island, Illinois on October 25, 1937. He received his B.S. and Ph.D.(1963) from M.I.T. After two years as a postdoctoral fellow at the University of California, Berkeley, he joined the faculty at the University of Pennsylvania where he became Professor of Materials Science and Engineering in 1974.

At the University of Pennsylvania, Dr. Worrell an internationally known research group in high-temperature materials chemistry. His early research emphasized the thermodynamic and kinetic properties of high temperature materials chemistry. He received an NSF award for his work on stable platinum compounds. Dr. Worrell was known for his solid-electrolyte research. He was first to propose and use thoria-based electrolytes in high-temperature electrochemical-cell investigations. Many other areas of research produced important discoveries and basic information.

Dr. Worrell became a active member of The Electrochemical Society in 1970. He served on numerous committees: Technical Affairs, Ad Hoc on External Affairs, Solid State Monograph, Division Advisor for Electronics, Dielectric Science and Technology and Luminescence and Display Materials Group. He was Chairman of Honors and Awards Committee (1984-1987) and chairman of several award selection committees. He organized and participated in numerous technical symposia. He published over 90 scientific papers, has 8 patents, and directed more than 25 doctoral theses.

Dr. Worrell was elected Society Vice-President in 1989 and served as President in the term 1992-1993. He received the Outstanding Achievement Award of the High Temperature Division in 1988, the Carl Wagner Memorial Award in 1989, elected Fellow of The Electrochemical Society in 1994, Solid State Science and Technology Award in 1995, and became an Honorary Member of the Society in 1996.

Dr. Worrell served on numerous national and international advisory panels. He was Chairman (1974-1977) of the National Research Council Committee on High-Temperature Science and Technology, and a member (1977-1979) of NRC Committee on Chemical Sciences. He was a member (1979-1986) and Chairman of the University of Chicago Review Committee for the Division of Argonne National Laboratory. He was a member of the External Advisory Committee of the Center for Materials Science at Los Alamos National Laboratory.