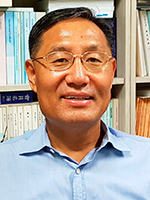 Yang-Kook Sun is presently Professor of Energy Engineering at the Hanyang University in Seoul, South Korea. He received his PhD in chemical engineering at the Seoul National University in 1992. He was group leader at Samsung Advanced Institute of Technology and contributed to the commercialization of the lithium polymer battery. His major research interests are design, synthesis, and structural analysis of advanced energy storage, and conversion materials for application in electrochemical devices, lithium-ion, lithium-sulfur, lithium-air, and sodium-ion batteries.

One of his major achievements is the discovery of a new concept of layered concentration gradient NCM cathode materials for lithium-ion batteries. Sun has several international collaborations around the world. He is the author of more than 474 publications in peer-reviewed scientific journals and 341 registered and applied patents.