Home / About ECS / History of ECS / Ernest B. Yeager 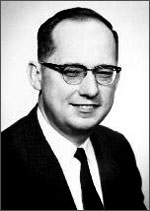 Ernest B. Yeager was born in Orange, New Jersey on September 24, 1924. He received his B.A. degree from New Jersey State College at Montclair in 1945, his M.S. from Western Reserve University in 1946, and his Ph.D. in Physical Chemistry from the same University in 1948. Dr. Yeager stayed on as an Instructor in the Department of Chemistry at Western Reserve. He became an Assistant Professor in 1951, an Associate Professor in 1953, and a Professor in 1957. During the 1964-1965 academic year, he served as Chairman of the Department of Chemistry. He was Director of the Ultrasonics Research Laboratory and Chairman of the Frontiers in Chemistry series at the University. Dr. Yeager was Director of the Case Center for Electrochemical Sciences from 1976 until 1991. In 1994, the Center was renamed the Ernest B. Yeager Center for Electrochemical Sciences.

His research interests included the properties of electrolytes, electrode kinetics, applications for ultrasonic techniques in physical chemistry, and emission spectroscopy. He and his graduate students are credited with the initial development of the sodium amalgam-oxygen fuel cell. In addition to many published articles in electrochemistry and ultrasonics, Dr. Yeager was editor of The Electrochemical Society Monograph on “Electrode Processes”.