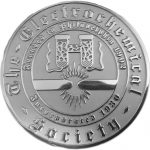 The Canada Section Electrochemical Award was established in 1981 to recognize significant contributions to the advancement of electrochemistry in Canada.

The recipient will have made contributions while working in Canada, but need not be a Canadian citizen. Candidates may be nominated from industry, government or universities, and must fulfill one or more of the following criteria:

The nomination package will include:

The award consists of a gold medal.