2014 ECS/SMEQ Meeting in the Books 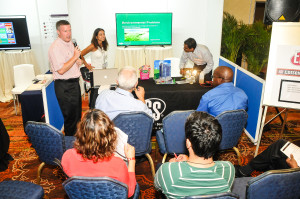 “Pee to Energy” demo at the Edison Theatre in the exhibit hall in Cancun, Mexico. Rob Gerth, Gerri Botte, and Madhi Muthuvel getting ready to go.

I’m working on an official review of what happened at the meeting. In the meantime, I’ve been looking at some of the photos which got me thinking about the adventure that is an ECS meeting.

A couple of quick hits first:

This was my second meeting. Everyone wants to know how Cancun was. Very nice, but a saying left over from my video days is, “On location is no vacation.” The ECS staff is up before everyone else and in bed after.

And I must say the sponsors are some of the most interesting and hard working people too. We can’t thank them enough for supporting us and putting on some pretty cool exhibits. Here’s the whole list in case you want to get hold of anyone. Hope to see you and them in Chicago.

Speaking of the exhibit hall, we tried something new at our ECS booth. We started little shows at what we are calling the Edison Theatre. It’s like coming to see the dolphin show at 2:00, 3:45 and 6:10 pm. Actually, we are trying to create a little space for attendees to demonstrate something they are working on or want to share outside of the normal technical sessions.

The grand opening included author information sessions for people who want to get published in ECS journals and Gerri Botte, and Madhi Muthuvel showing off their GreenBox technology for changing pee to power. (The photo above is me asking for contributions for the demo. Got some laughs and some concerned looks.) If you have something you want to demo in Chicago, let’s talk: rob.gerth@electrochem.org.

The “Free the Science” 5K run was humid, but a great run, although we suspect it was more like a 6K. Times and some photos are posted now on Facebook. This was the second one and we increased the pack from 25ish in Orlando to 75 runners. The overall winner was Matthew Lawder (21:00) of Washington University in St Louis. Matthew won at the spring meeting in Orlando, too. The top women finisher was Rana Mohtadi (27:06) of Toyota Research Institute of North America.

Our partnership with the Bill & Melinda Gates Foundation went very well. The winners have been notified and as soon as they get the OK from their institution, we’ll have a lot more on that. Read a bit more now, here.

More to come on this meeting. Of course there was a lot of amazing science there too. If you have never been, plan on going to Chicago.