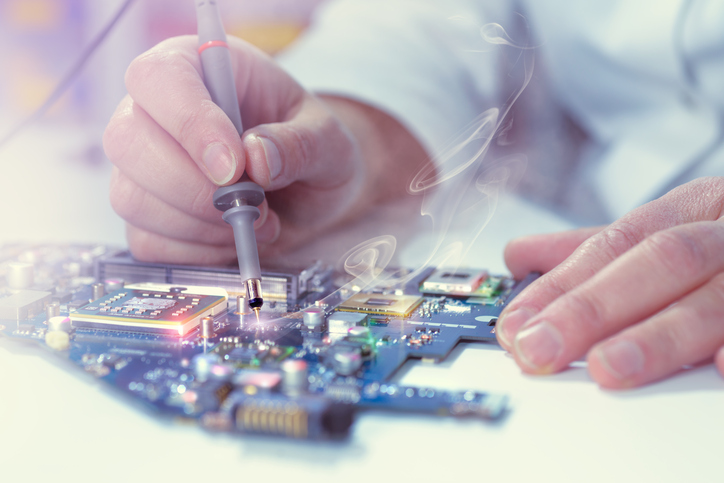 “Sapphire itself is aluminum oxide. When the aluminum is the top layer of the substrate, it likes to give up its electrons to the film. This heavy negative doping—electrons have negative charge—limits both the intensity and carrier lifetime for photoluminescence, two important properties for all optoelectronic applications, such as photovoltaics and photosensors.”

Once they determined that the aluminum was giving up electrons to the film, they used a sapphire substrate that was cut in such a way as to expose the oxygen rather than the aluminum on the surface. This enhanced the photoluminescence intensity and the carrier lifetime by 100 times.

In related work, a second team of researchers led by the same Penn State group used doping engineering that substitutes foreign atoms into the crystal lattice of the film in order to change or improve the properties of the material. They report their work in Advanced Functional Materials.

“People have tried substitution doping before, but because the interaction of the sapphire substrate screened the effects of the doping, they couldn’t deconvolute the impact of the doping,” says Zhang, who is also the lead author of the second paper.

Using the oxygen-terminated substrate surface from the first paper, the team removed the screening effect from the substrate and doped the molybdenum disulfide 2D film with rhenium atoms.

“We deconvoluted the rhenium doping effects on the material,” says Zhang. “With this substrate we can go as high as 1 atomic percent, the highest doping concentration ever reported. An unexpected benefit is that doping the rhenium into the lattice passivates 25 percent of the sulfur vacancies, and sulfur vacancies are a long-standing problem with 2D materials.”

The doping solves two problems: It makes the material more conductive for applications like transistors and sensors, and at the same time improves the quality of the materials by passivating the defects called sulfur vacancies. The team predicts that higher rhenium doping could completely eliminate the effects of sulfur vacancies.

“The goal of my entire work is to push this material to technologically relevant levels, which means making it industrially applicable,” Zhang says.

Contributors to the Scientific Reports paper are from Penn State, the Molecular Foundry at Lawrence Berkeley National Laboratory, and the University of Pittsburgh.

The National Science Foundation, the Semiconductor Research Corporation, Defense Advanced Research Projects Agency, the US Department of Energy, the Nanoelectronics Research Initiative, and the National Institute of Standards and Technology supported portions of this work.