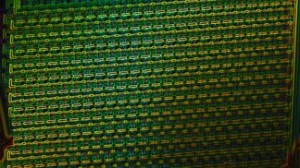 The new method, which uses beads and microfluidics can change the way we study mixed populations of cells, such as those of tumors.
Image: EPFL

Scientist have developed a process that has the potential to make the study of tumor cells significantly more efficient.

They call it a “lab-on-a-chip,” and it’s allowing scientist to isolate single cells for study. The key here is in the difficulty that scientists typically face when attempting to study a single cell in a population. Due to factors such as variation of the isolated cell’s biochemistry and function, and technological and physical limitation dealing with size and fragility of the cells, studying at the single-cell level has always proven to be difficult.

In order to combat this issue, Ecole Polytechnique Federale de Lausanne (EPFL) scientists have combined affinity beads with microfluidics to produce an integrated, highly sensitive method for studying single cells – which has the potential to be adopted into clinical diagnostics.

The full article entitled “Microfluidic Single-Cell Analysis with Affinity Beads,” has recently been published in the journal Small.

In order to develop a successful method, the scientists had to overcome the obstacles encountered when attempting single cell analysis. They did this by combining several microtechnologies.

Micrometer- to submicrometer-sized affinity beads transferred into cells, and extraction of these beads from individual cells in a microfluidic channel. In the technique, developed by PhD student Michael Werner, the target molecule inside a single cell is captured on (sub)micrometer-sized silicon beads, which have previously been coated with capture agents, e.g. antibodies, that can bind specifically to the target biomolecule in the cell.

But the process doesn’t end there. When the cell is isolated, a process called phagosome begins. With this process, the bead is not able to find its target biomolecule inside the cell. Researchers used a photochemical trick to disrupt the phagosome by shining light on the cells to disrupt the membrane.

The bead-containing cells are put through a microfluidic chip. This is a small device designed specifically to control the flow of tiny volumes of fluids across a network of small channels (100 μm in width) etched into glass slides. The channels in this study are so narrow that cells can only pass through one at a time. The cells pass through a point in the channel where a “laser tweezer” (a highly focused laser beam) catches individual cells by interacting with their internalized beads. The trapped cells are then lysed, leaving only the beads with the bound target biomolecules in the laser trap. The beads are then analyzed directly inside the microfluidic device.

Interested in what else science is doing to improve global health? Head over to the Digital Library to see what electrochemistry and solid state science are doing to made advances in medicine.

P.S. While you’re there, make sure to sign up for our free RSS Feeds and e-Alerts!