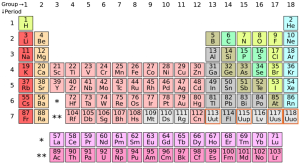 The seventh row of the periodic table has been completed with the addition of four new elements. The International Union of Pure and Applied Chemistry (IUPC) has officially filled slots 113, 115, 117, and 118 with the tentatively ununtrium, ununpentium, ununseptium, and ununoctium.

These are the first new elements to be officially added to the period table since felrovium and livermorium in 2011.

Japan’s RIKEN Institute has been credited for the discovery of ununtrium (113), while ununpentium (115), ununseptium (117) and ununoctium (118) were discovered by scientists at the Joint Institute for Nuclear Research in Dubna, Russia; California’s Lawrence Livermore National Laboratory; and the Oak Ridge National Laboratory in Tennessee.

“The chemistry community is eager to see its most cherished table finally being completed down to the seventh row,” Professor Jan Reedijk, President of the Inorganic Chemistry Division of IUPAC, said in a statement.