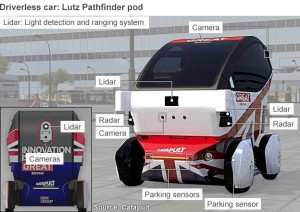 While the LUTZ Pathfinder pod may be the first driverless car in the UK to hit the streets, you won’t see it on a highway any time soon. The vehicles were designed to help shoppers, the elderly, and commuters travel short distances. Those who wish to use the cars will be able to hail them through a smartphone app.

The vehicles are expected to begin roving around the pavements and pedestrianized areas of Milton Keynes and Coventry later this year.

With this innovation and other exciting developments in driverless car technology, the UK’s government will be looking to rewrite highway code to accommodate for these vehicles.

Sensors may be the driving force behind this new innovative technology, but they’re also the key players for a lot of other discovers. Check out the extensive scope of sensors.

And of course we’ll be talking all about sensors at the ECS 227th Meeting in Chicago the coming May! Don’t miss out on all the great sensor symposia.