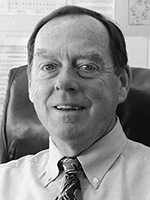 Glenn Stoner obtained his BS and MS degrees from the Missouri School of Mines in 1962 and 1963 respectively. After receiving his PhD from the University of Pennsylvania in 1968 under the supervision of Eliezer Gileadi, Dr. Stoner accepted a senior scientist position with the University of Virginia (UVA). He joined the faculty in 1973 and taught until his retirement in 2003, mentoring and teaching hundreds of students, and helping to build an internationally recognized program in electrochemistry. What Dr. Stoner and colleagues George Cahen and Louie Scribner started as a one-laboratory research program in 1973 became to the multi-departmental Center for Electrochemical Science and Engineering in 1986.

In 1993, the National Capital Section of The Electrochemical Society (ECS) awarded Dr. Stoner the Robert T. Foley Award in recognition of his tremendous dedication to the education and professional development of his students, and his own accomplishments in the field of electrochemistry and corrosion science. In 2000, Dr. Stoner received the Henry B. Linford Award from ECS, honoring his distinguished teaching excellence in fields important to the Society. He advised or co-advised nearly 50 MS degrees and nearly 25 PhD degrees.

He has co-authored 72 publications and has 13 patents. He has served as a consultant to over 75 companies and three national laboratories.

Dr. Stoner was a visiting professor at the University de Rouen in France in 1973-4 and the University of Tel Aviv in 1980. He was also a visiting consultant to BHP Steel in Port Kembla, Australia in 1996, 1997, and 1999. He also played a leading role in establishing the Jerome Kruger Visiting Scholar Program at the University of Virginia. He truly kept UVA’s Jeffersonian ideas of being dedicated to a community of learning in the avid pursuit of knowledge.

Dr. Stoner and his wife of 54 years, Marlene, have three sons and five grandchildren.