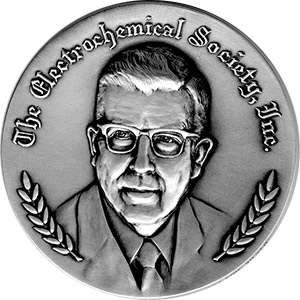 The Henry B. Linford Award for Distinguished Teaching was established in 1981 for excellence in teaching in subject areas of interest to the Society.

The recipient will be distinguished for teaching excellence in subject areas of interest to the Society. The recipient does not need to be a member of The Electrochemical Society.

Nominations, once submitted, shall be considered in effect for two consecutive award cycles. Sponsors and endorsers should be members of The Electrochemical Society.

The award consists of a silver medal and a plaque that contains a bronze replica, both bearing the recipient’s name, the sum of US $2,500, complimentary meeting registration for award recipient and companion, a dinner held in recipient’s honor during the designated meeting, and Life Membership in The Society. The recipient will receive the award in person at the designated Society meeting and deliver a general address on a subject related to the contributions for which the award is being presented.

About Henry B. Linford