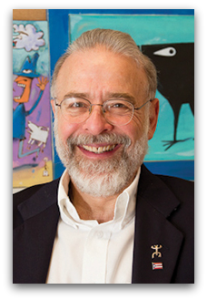 “You’re not going to solve the energy problem by separating paper and plastic. We need to transition out of our dependency on fossil fuels and into renewables. As a society, it is really up to us to change.”

Fortunately, Abruña and scientists like him are working to move us toward a more energy efficient and sustainable future through developments in fuel cells and batteries, which will power energy efficient and environmentally safe cars, as well as reshape the energy infrastructure itself.

“If we have any hope of solving the energy problems, we need better energy conversion and storage,” said Abruña.

One way to addresses the issues in energy is though the production of better batteries. Abruña is looking at the promising potential of the lithium-sulfur battery to help address some of these issues.

“I think they have tremendous potential,” said Abruña. “They’re viable, unlike other popular designs like the lithium-air. Sulfur packs a lot of energy, and it is dirt cheap.”

The common problem with this type of battery is its solubility. Abruña’s lab may have a way to combat this issue.

This from Cornell Chronicle:

But Abruña’s lab has found a potential solution. They make nanoscale sulfur spheres and coat them with a layer of polyaniline that keeps the sulfur inside. They remove some of the sulfur so that upon discharge, the assembly can accommodate the resulting volume expansion without breaking, while containing enough sulfur to maintain battery longevity.

PS: Will we see you at the upcoming 227th ECS Meeting in Chicago? If so, make sure to find us and grab a pack of the first ever Official ECS Major League Trading Cards!
Spoiler: Abruña is one of the 50 scientists highlight in the first series!