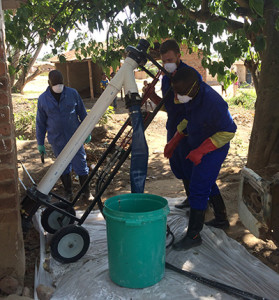 Critical technology gaps in water, sanitation, and hygiene are being faced all over the world. According to UNICEF, 2.5 billion people—36 percent of the world’s population—don’t have access to a toilet. Due to this, many people in the developing world either practice open defecation or utilize pit latrines. In turn, this leads to a high risk of contracting diseases ranging from typhoid to hepatitis.

Tate Rogers, an engineering student from North Carolina State University, decided that something has to be done about this. In 2011, Rogers began developing a device that would help those in the developing world more safely deal with raw sewage.

It’s four years later, and the project is still under way—but it’s beginning to come to fruition.

Rogers is now putting the final touches on his hand-held tool that uses a gasoline-powered auger to pump waste out of pit latrines into portable containers. Typically, workers who empty pit latrines expose themselves directly to raw sewage. This tool allows for limited exposure, thus leading to less illness.

Rogers has received two grants from the Gates Foundation to build what he has termed the Excrevator.

“The Excrevator works well with waste,” Rogers says. “But there is an issue when it comes to dealing with garbage.”

Due to the disposal of trash in the pit latrines, the Excrevator gets clogged when trying to extract waste. For this reason, Rogers has developed the macerator, which can chop up debris. Both devices can be run by one power source called a Powercube.

“Based on our fieldwork, we have a really good understanding of the challenges surrounding waste handling in the developing world,” Rogers says. “And we’re optimistic that we’ll have reached a point in the next couple of years where we can move from prototype development to begin scaling up manufacturing for widespread use.”

Here at ECS, we’re also working toward a solution in the global sanitation crisis. Along with the completion of the first “Science for Solving Society’s Problems Challenge,” ECS is also moving toward open access publication. With this move, scientific research results will be more widely accessible—thereby speeding up the scientific discovery process.

You can support the effort toward open access by donation to the ECS Publications Endowment.