By: Venkat Subramanian, University of Washington

This article refers to a recently published open access paper in the Journal of The Electrochemical Society, “Direct, Efficient, and Real-Time Simulation of Physics-Based Battery Models for Stand-Alone PV-Battery Microgrids.” 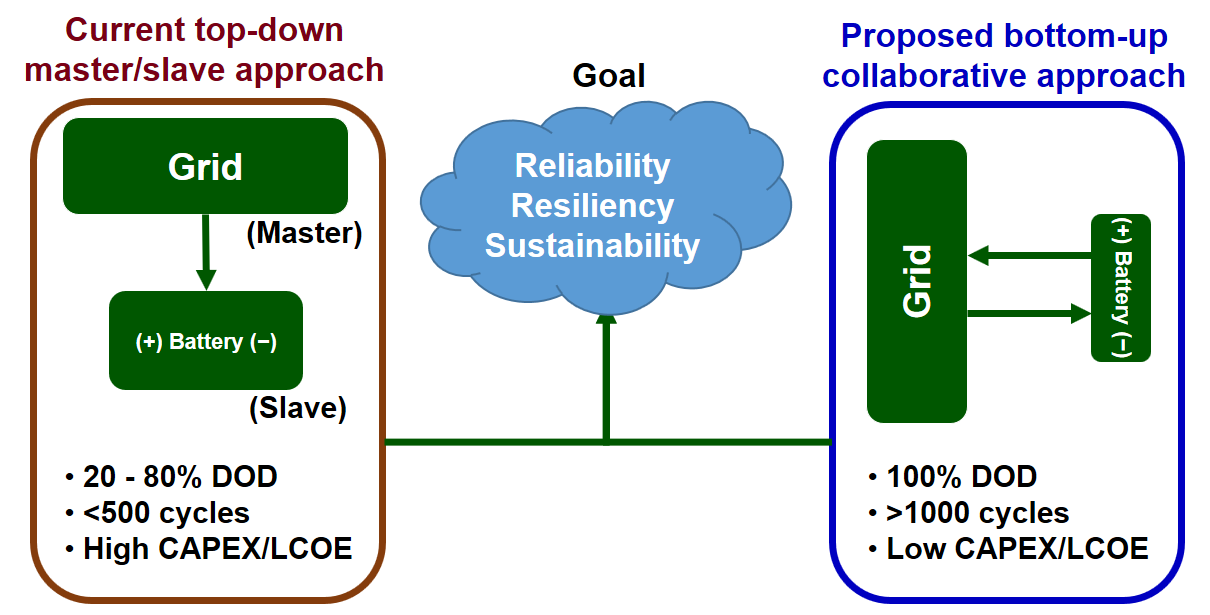 Tesla engineered a good electric car successfully by engineering a car design that can accommodate large battery stacks. Our hypothesis is that the current grid control method, which is a derivative of traditional grid control approaches, cannot utilize batteries efficiently.

In the current microgrid control, batteries are treated as “slaves” and are typically expected to be available to meet only the power needs. Typically, if grid optimization is done at the higher level, and then batteries are used as slaves, including models that predict fade can be used in a bi-level optimization mode (optimize grid operations and at every point in time, optimize battery operation). This way of optimization will not yield the best possible outcome for batteries.

In a recently published paper, we show that real-time simulation of the entire microgrid is possible in real-time. We wrote down all of the microgrid equations in mathematical form, including photovoltaic (PV) arrays, PV maximum power point tracking (MPPT) controllers, batteries, and power electronics, and then identified an efficient way to solve them simultaneously with battery models. The proposed approach improves the performance of the overall microgrid system, considering the batteries as collaborators on par with the entire microgrid components. It is our hope that this paper will change the current perception among the grid community.

“Recently, aggressive and efficient control strategies for grid and renewable grids are heavily supported by the U.S. Department of Energy,” the authors state in the paper. “However, current perception amongst the grid community is that physics-based battery models are too complicated to be used in grid control.”

In our humble opinion, energy and information flow should be bidirectional and a renewable grid should be modeled and controlled simultaneously aiming for the best possible outcomes for all the devices including batteries. This will require strong collaboration between battery and grid modelers, application of nonlinear model predictive control techniques pioneered and championed by chemical engineering and other control communities. Both Pacific Northwest National Laboratory (grid modernization initiative) and the University of Washington have strong leaders in grid control and modeling. We hope to make progress in this topic.