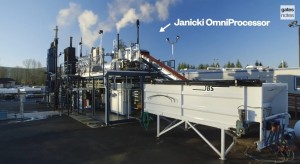 This from Gates Notes:

Because a shocking number of people, at least 2 billion, use latrines that aren’t properly drained. Others simply defecate out in the open. The waste contaminates drinking water for millions of people, with horrific consequences: Diseases caused by poor sanitation kill some 700,000 children every year, and they prevent many more from fully developing mentally and physically.

The undeniable truth is that in order to improve sanitation in developing countries, we need to develop innovative solutions.

That is why work such as this and our partnership with the Bill & Melinda Gates Foundation is so important – and potentially, life-changing.

Gates states that the next-generation of the self-sustaining OmniProcessor will be able to handle waste from 100,000 people, producing up to 86,000 liters of potable water a day and net 250 kw of electricity.

This innovation can do more than aid in solving a global crisis – it may also turn waste into a commodity.