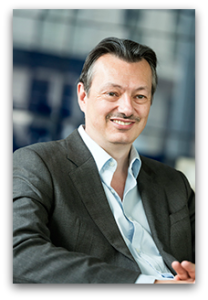 Prof. Brandon was awarded the Royal Academy of Engineering Silver Medal in 2007, and the ASME Francis Bacon Medal in 2014, for his contribution to fuel cell science, engineering and technology.

He leads a research group focused on the science and engineering of electrochemical devices for energy applications, with a particular focus on fuel cells, redox flow cells, and batteries.

How did you become interested in electrochemical power and fuel cells?
My PhD was in electrochemical engineering, under Prof. Geoff Kelsall at Imperial College. When I joined the BP Research centre after my PhD I was exposed to the energy challenge, and with my research background became involved in some work on fuel cells. But my interest in fuel cells really took off when I moved to Rolls-Royce, to join a newly formed fuel cell team. There I was one of the inventors of the Integrated Planar Solid Oxide Fuel Cell.

Who has been the biggest influence on your scientific career? Why?
My PhD supervisor, Prof. Geoff Kelsall, set me on the right path. Then when I joined Imperial College as a member of academic staff it was real pleasure and education to work with the late Prof. Brian Steele, from whom I learned a huge amount about the relationship between materials science and device engineering.

What are some of the roadblocks in implementing widespread use of renewable energy?
The cost and maturity of technology is of course vitally important. But so are the attitudes of consumers, developers and policy makers. We need the technology to be available, and we need a demand for its widespread use.

What do you do for fun?
When family duties allow, my wife and I enjoy collecting and viewing art and sculpture, working in our garden, and traveling.

Description
The role and value of electrochemical technologies such as fuel cells, lithium batteries, flow batteries, supercapacitors, and electrolysers in delivering a secure and sustainable energy system will be analyzed and discussed.  In this context, commercial opportunities for these technologies will be introduced in the near, medium and long term, and the research challenges, and associated opportunities for innovation, will be highlighted.