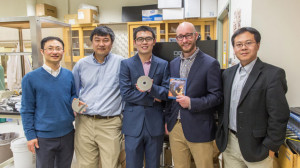 These high-density data discs get their hue from microscopic structures etched into their surface, which in turn can make solar panels more efficient by increasing the light absorption of the material they’re on.

In order to make solar cells more efficient, texture can be placed on the cell in order to scatter light more effectively, thus increasing the cell’s efficiency. Because of the Blu-ray disc’s quasi-random pattern, it provides the right texture to improve the cells’ light absorption across the solar spectrum.

The researchers also state that the video content doesn’t matter – whether you have an unwanted copy of “The Wolverine” or are trying to get rid of one of your six copies of “My Cousin Vinnie” – your old Blu-ray discs have the potential to fulfill a “green” second use.

The Northwestern researchers have demonstrated that a Blu-ray disc’s strings of binary code 0s and 1s, embedded as islands and pits to store video information, give solar cells the near-optimal surface texture to improve their absorption over the broad spectrum of sunlight.

If your research topics of interest include solar energy, you’re not going to want to miss the opportunity to network with the greatest minds in electrochemical and solid state science and our next two meetings: 227th ECS Meeting in Chicago, Illinois, USA & ECS Conference on Electrochemical Energy Conversion & Storage with SOFC-SIV in Glasgow, Scotland.

In the meantime, make sure to keep up with the latest trends in solar energy through the research found in our Digital Library.