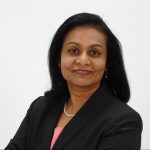 The Electrochemical Society hosted Dr. Judy Jeevarajan’s live webinar, “Characterization of Li-ion Battery Thermal Runaway in ESSs and EVs,” on August 3, 2022. Dr. Jeevarajan took audience questions during a live Question and Answer session at the end of the presentation. She kindly answered, in writing, questions not answered during the broadcast. Find these responses below.

Did you consider IR scanning instead of physical T/C to measure the temps?
Yes, we considered it. For a majority of our tests, IR thermal imaging was not possible due to the chamber we were using. Also, we did not want to place our IR camera inside the test chamber, as there was always the threat of the camera being destroyed during the thermal runaway.

In conducting the thermal runaway tests, were the cells loaded to draw the designed Ah or Wh values? Also, was the test done at elevated temperatures while being electrically loaded? Could electrical stress contribute to the initiation of thermal runaway?
No, cells did not have any loads since we were working on designs for transportation (where cells and batteries do not power anything). Electrical stress can contribute to the initiation if the charge or discharge protocols were beyond what the cells or battery could handle.

Does the UL offer a hands-on training/workshop on this topic?
Not at this time.

What are the best parameters to monitor in order to detect Thermal Runaway Event the fastest? For example, concentration of specific gases, pressure (in a sealed or semi-sealed battery compartment), air temp, packaging temp etc.?
The best parameters are voltage and temperature. Voltages allow one to determine when the initial vent and final thermal runaway occur. Temperature measurements, if placed appropriately, track the same very well.

What is the composition of the NMC cells used?
We do not have details of the ratios of metals in the NMC.

Among all tests, what is the single most significant thermal propagation mode (gas/spills, conduction, etc.)?
Heat transfer through convection and conduction and somewhat due to radiation (depends on cell design and mitigation materials), gas and electrolyte leaks can also add to propagation. But heat needs to be present for electrolyte liquids or vapors to become a source of thermal runaway.

Would mathematical modeling be relevant to predict runaway events (and of course thermal propagation), given high dispersion of results?
Yes, if the models take into account high-fidelity data.

Is there an established standard method for elucidating thermal runaway in batteries?
Most standards call out the use of the heating tape.

How can we mitigate the fire issues of NMC based Li-ion batteries?
Understanding the thermal design in the batteries, the thermal gradient, and the worst case thermal locations will help in designing mitigation measures, either with mitigation materials or container design to remove heat faster than it is created in the batteries. This can reduce the risk of fires in any Li-ion battery.

Where do you recommend getting the best advice for firefighters dealing with ESS fires involving Li-ion batteries?
Fire suppression is still being optimized. There are a few studies in the literature that discuss the use of various fire suppressants. Fire experts should be contacted for such details. We are open to discussions on this subject since we have been performing some research in this area.

Very advanced flexible electronic devices are developed. So, is it possible to make flexible Li-ion cells to sustain a long life without much heat or explosions?
Yes. There are some thin flexible designs that are available today. The key is to confirm that there is no break in the separator during the flexing process so the electrodes do not touch each other and experience a short circuit.

Do you have any gas release information for HF (hydrogen fluoride)?
We do know that HF is released and there is at least one study from Chalmers University of Technology, Sweden, that discusses the production of HF. It is difficult to get a good detection of HF due to its reaction with chamber materials and due to its condensation on the walls of the chamber. We are still working on optimizing the detection of HF.

Why is 2mm thickness optimal for preventing propagation?
We have done a lot of work in this area (see papers published in 2015) with various thicknesses. We found that anything more than 2 mm might work but that would cause other issues like large battery containers and also more IR drop in a battery design.

Why was the temperature of a single cell higher above the heating element than below? How did you control heat dissipation?
The heat distribution on the cell is pretty uniform and it flows in the axial direction for the Li-ion cylindrical cells. If there was a bigger difference, it is probably because of heat dissipation from that part of the cell that caused it to be lower than the top part of the cell. So, how the cell is held can make a difference.

Since pouch cell is subjected to expansion during charging, how could the influence of the foam and no foam scenario impact the thermal runaway severity?
Not sure what this question is referring to. Depending on the type of foam, it may or may not allow the required expansion of the pouch cell. In general, prismatic cell designs (pouch or metal can) required restraints on the flat face of the cells to prevent expansion. The pressures required for the restraints are determined by the manufacturer.

A cell at a 3 percent SOC has less active material, so how could the thermal runaway be more severe?
I mentioned that this was an anomaly. The cells were manufactured with low quality. Hence, the cells vented liquid electrolyte when subjected to the thermal runaway test. Also, because the liquid electrolyte has components that have a low flash point, it is possible that the vapors combusted and as the vapors spread and touched the hot surfaces of the neighboring cells, they underwent propagation, too. The open box tests were carried out to record this event and understand it.

For a high C rate pouch cell, what is the best characterization model to use? HPPC test, EIS or power discharge? ECM and NTGK model?
The load depends on the application.

Could you provide more details about how you performed the gas analysis part of the experiment?
There were two types of tests carried out. One was in an open environment using the cone calorimeter method. The other was in the closed chamber using the ASTM E918 method.

Did you consider the manufacturer battery thickness of the electrode materials used for all tests?
The cells are commercial cells and have been used as a test vehicle for many years.

Have you done any atomistic computational study for better predictions to compare with your lab work?
We have started doing that with the new modeling experts in our team.

What kind of extinguisher or medium should we use to deal with a thermal runaway situation or lithium ion battery fire (both NMC and LFP)?
We found water to be successful so far. Other commercial extinguishers have also been shown to be effective.

In terms of a single cell, in your opinion, what type is the safest (cylindrical or pouch)?
One can take a safe cell and make an unsafe battery or vice versa. So battery design, stringent testing in the relevant configuration and environment, and stringent screening of cells and batteries are the critical factors in determining the safety of a battery design.

Have you used any software to model reaction (including combustion) and heat transfer in batteries, to gain more insight into mechanisms and important parameters?
Yes. Our modeling experts use at least three different software platforms to model thermal runaway.

Were these thermal runaway propagation studies repeatable? That is, if you would run the same experiments, under same conditions, was the propagation behavior the same as seen before?
Yes, at least three trials were performed under each condition, sometimes more. Our results are very consistent.

If there is notable variability in thermal runaway within the same type of battery, which would get amplified for a large pack, how would you recommend one design suitable mitigation strategies? Do we model it based on just one experiment, or treat it as a statistical problem, with repeated experiments?
Results should be repeatable and consistent for at least three tests. If variability is observed, one needs to understand the cause of the variability. If that is the inherent property, then one needs to design for worst case results observed.

Where does CO/CO2 gas come from? Why do LFP and NMC have different CO levels at high temp?
CO comes from the breakdown of the carbonates in the electrolyte. CO2 is formed when CO is oxidized by oxygen from the cathode breakdown or from air. The reason the LFP cell had a higher level of CO2 and no CO in our results was because the cells had undergone complete combustion and charring that resulted in all the CO being oxidized to CO2. The NMC cell did not undergo similar fires and did not show any external charring.