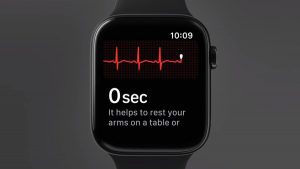 The newest Apple Watch has arrived. Updated, new, and shiny, the Series 4 watch offers a state-of-the-art heart monitor feature that can alert users of potential heart problems, according to IEEE Spectrum. The app, cleared by the Food and Drug Administration, works like an electrocardiogram, allowing wearers to proactively manage their health. Electrodes on the back of the watch and on the watch band allow wearers to detect irregular heart rhythms that can warn consumers of any possible atrial fibrillation’s that could possibly lead to blood clots or strokes; heart disease being one of the top killers in the western world. The Series 4 Apple Watch is truly unique; the first certified ECG monitor to be sold over the counter, directly to consumers. END_OF_DOCUMENT_TOKEN_TO_BE_REPLACED

END_OF_DOCUMENT_TOKEN_TO_BE_REPLACED

Apple Expected to Release Car by 2019

Even after the release of the highly anticipated iPhone 6s, Apple remains in the spotlight with the announcement of the company’s potential electric car.

Apple’s entrance into the electric car race puts them up against competitors such as Tesla and Google. The company aims to follow a Tesla path rather than Google—delivering cars directly to the consumers rather than selling the technology to established automobile manufactures. It is expected that the first iCar (presumed name) will hit the market by 2019.

These companies are not the only ones interested in green energy alternatives for automobiles. Car manufactures such as Toyota are also directing their attention to this topic. Aside from the release of the Toyota Prius PHV, the company has also allowed for royalty-free use of their fuel cell patents and has recently partnered with ECS to fund new projects in green energy technology.

Technology companies and automobile makers alike are transitioning away from gas-guzzling vehicles to environmentally friendly automobiles, utilizing hydrogen and electric power more frequently. This is in part due to consumer concern regarding climate change and danger of increased greenhouse gas emissions.