John B. Goodenough Award of The Electrochemical Society 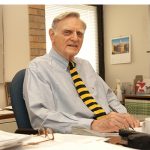 The John B. Goodenough Award was established in 2022 to recognize distinguished contributions to the fundamental and technological aspects of electrochemical materials science and engineering. The award recognizes outstanding contributions to materials innovations in the areas of batteries, solid ion conductors, fuel cells, transition-metal oxides, and/or magnetic materials.

The recipient shall be distinguished for paradigm-shifting contributions in the fields of electrochemical and/or solid state science and recognized for exceptionally creative experimental or theoretical studies that opened new directions in:

Membership in The Electrochemical Society is not a requirement.

Nominations are considered in effect for two consecutive award cycles.

The award consists of a gold medal; plaque containing a bronze replica of the medal, both bearing the recipient’s name; US $10,000; complimentary meeting registration for the award recipient and companion; dinner in the recipient’s honor during the designated meeting; and ECS Life Membership. The recipient receives the award in person at the designated Society meeting, and delivers a general address on a subject related to the contributions for which the award is presented.

About John B. Goodenough

John B. Goodenough is a Nobel laureate in chemistry and internationally prominent solid state scientist, widely recognized for his role in developing the rechargeable Li-ion battery.