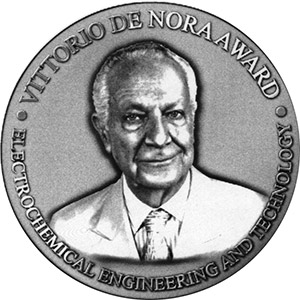 The Vittorio de Nora Award was established in 1971 to recognize distinguished contributions to the field of electrochemical engineering and technology.

The recipient will be distinguished for contributions to the field of electrochemical engineering and technology.

Nominations shall be considered in effect for two consecutive award cycles.

The award consists of a gold medal and a plaque that contains a bronze replica thereof, both bearing the recipient’s name, the sum of US $7,500, complimentary meeting registration for award recipient and companion, a dinner held in recipient’s honor during the designated meeting, and Life Membership in The Society. The recipient shall receive the award at the designated Society meeting and deliver a general address on a subject related to the contributions for which the award is being presented.

Vittorio de Nora performed research in electrochemistry, was awarded a great number of patents and authored many scientific publications. He is known internationally for his many contributions to industry particularly in the manufacture of chlorine and in the development of dimensionally stable electrodes which have revolutionized the electrochemical and electrometallurgical industries.