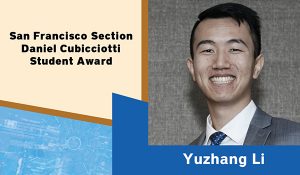 Yuzhang Li is a PhD student working with Professor Yi Cui on next-generation energy storage technologies at Stanford University. His research approach seeks to tackle problems from both an applied and fundamental perspective, which is necessary for the development of high energy density batteries.

Throughout his PhD, he has developed an advanced materials design for Li-ion batteries (Nature Energy 1, 15029, 2016) and pioneered the cryogenic-electron microscopy technique to study the atomic structure of battery materials (Science 358, 506, 2017). His work has been highlighted by multiple media outlets (including Forbes magazine, ABC7 news, SLAC), and recognized by several awards (including MRS graduate student gold award and the ACS outstanding speaker award).

Each year, the ECS San Francisco Section assists a deserving student in Northern California in pursuing a career in the physical sciences or engineering through the Daniel Cubicciotti Student Award. The award was established in 1994 in honor of Daniel Cubicciotti: spirited researcher and innovator. Recipients receive an etched metal plaque and a $2,000 prize.