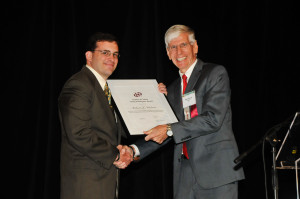 The Award consists of a scroll and a check for $1,000 CAN. The Award will be presented at a meeting of the Canada Section in 2015 during which the award recipient will present a lecture on a subject of major interest to him/her in the field of electrochemical science and technology and/or solid state science and technology. It may relate to the citation of the Award, or to current activity.

Do you know someone who qualifies for this award? If so, please forward nominations and supporting documents to Michael Eikerling.

Learn about all of ECS’s prestigious awards here.