The Future of Fuel Cells

Scientists have a lot of expectations when it comes to fuel cell technology. Not only are they efficient enough to compete with modern sources of energy, but they’re also environmentally friendly—a very important property in light of climate change.

However, depending on a precious metal for their development makes the commercialization of fuel cells difficult due to the high price point. The researchers at ANNL believe that their new catalysts could provide some relief in this area.

“Platinum represents about 50 percent of the cost of a fuel cell stack, so replacing or reducing platinum is essential to lowering the price of fuel cell vehicles,” said Di-Jia Liu, leader of the team at ANNL and ECS member.

Their catalyst replaces all the platinum in the fuel cell’s cathode, which usually requires four times as much platinum as the anode, and their new electrode design also optimizes the flow of protons and electrons within the fuel cell and the removal of water. 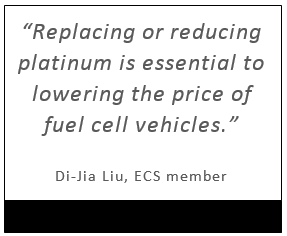 This could mean big things for automobile technology, which many believe will head in the direction of fuel cells rather than battery.

“In order for a fuel cell to work,” Liu explained, “the catalyst must be densely packed with active sites that are uniformly distributed throughout the cathode and directly connected to the arriving protons and electrons, while maintaining easy access to oxygen. The catalyst should also have an architecture that can readily channel away the produced water.”

Find the research in the Proceedings of the National Academy of Science of the United States of America .