Registration
Pre-registration through Events in your ECS My Account is required.
Don’t have one? It’s easy to create–visit Create an Account now.

ECS membership is not required to participate.

Lithium-ion batteries aren’t going away any time soon, but supply security concerns, safety issues, and the never-ending quest for higher energy density have researchers actively looking for and developing several types of “Beyond Lithium Ion” batteries. The furthest advanced of these are the sodium-ion analogs (NIBs) to LIBs, which operate on the same principle of ions shuttling between two electrodes. Because sodium is plentiful, inexpensive, and widely available in the United States, it is a natural choice for large-scale applications like grid storage and an excellent “Plan B” for vehicle applications in case of lithium supply bottlenecks. Our group has been investigating the electrochemical properties of stepped layered titanates to find alternatives to the hard carbon anodes currently used in NIBs. These materials are denser than hard carbons, insert sodium reversibly at low potentials (averaging about 0.3-0.6V vs. Na+/Na depending on exact structure), and have capacities exceeding 200 mAh/g, making them extremely promising candidates for replacement of hard carbon anodes in NIBs.

All solid state lithium metal batteries are also of interest because of the potential for much higher energy density and improved safety compared to LIBs, but are in a much less advanced state of development. Ion-conducting variants of Li7La3Zr2O12, known as LLZO, have attractive properties but processing is a considerable challenge. Our lab has employed freeze tape casting (FTC) to make composite electrodes, which can be combined with thin dense tapes and lithium anodes to make devices. Our group is the first to demonstrate a completely solid state battery based on LLZO, using components with practical form factors, which work at room temperature. What needs to be done to make these devices a reality for use in electric vehicles will be discussed in this talk. The state-of-the-art in solid state batteries will be compared to NIBs for various applications. 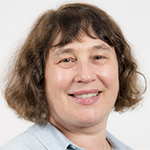 Dr. Doeff is Division Deputy Director of the Energy Storage and Distributed Resources Division, a Senior Scientist, and member of the Energy Storage Group at Lawrence Berkeley National Laboratory. She is currently Secretary of The Electrochemical Society. Dr. Doeff was named Fellow of The Electrochemical Society (2017) and Fellow of the Royal Society of Chemistry (2016). She received a BA in Chemistry from Swarthmore College in 1978, and PhD in Inorganic Chemistry from Brown University in 1983. Her research interests focus on materials for Lithium-Ion batteries and “Beyond Lithium-Ion batteries.”