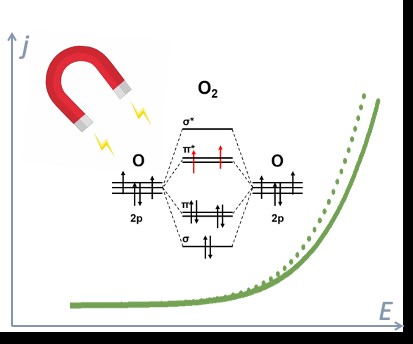 The slow kinetics of the oxygen evolution reaction (OER) limit the overall efficiency of water electrolysis for hydrogen production. As spin-dependent kinetics exist in triplet oxygen production, the spin alignment in active OER catalysts is critical for reducing the kinetic barriers in OER. In this presentation, recent progress in investigating the OER on magnetic oxides is introduced, as well as the finding of the spin pinning effect to make the spins in the most-active oxyhydroxides more aligned for higher intrinsic OER activity. The control experiments were conducted to confirm the enhancement of OER under an external magnetic field. Some other factors that may affect the observed phenomenon are also discussed. The spin pinning effect is found at the interface of oxideFM/oxyhydroxide. The spin pinning effect can promote spin selective electron transfer on OER intermediates to generate oxygens with parallel spin alignment, which facilitates the production of triplet oxygen and increases the intrinsic activity of oxyhydroxide by ~ 1 order of magnitude. The spin polarization process in OER is sensitive to the existence of active oxygen ligand (O(-)) in oxyhydroxide. When the O(-) is created in the first deprotonation step under high pH, the spin polarization of ligand oxygens will be facilitated, which reduces the barrier for subsequent O-O coupling and promotes the triplet O2 turnover. Combining the above understanding and the magnetic domain evolution, why an external magnetic field can promote OER can be answered. 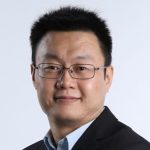 Zhichuan (Jason) Xu is a professor in the School of Materials Science and Engineering, Nanyang Technological University (NTU). There he holds leadership appointments as Deputy Director of the CN Yang Scholars Programme and Cluster Director of Materials for Energy and Catalysis, ERI@N. Prof. Xu’s research focuses on electrocatalysis and related materials. He serves as President of the ECS Singapore Section, and is a Fellow of the Royal Society of Chemistry and member of the International Society of Electrochemistry (ISE). Named a Clarivate Analytics Top 1% Global Highly Cited Researcher for the last four years (2018-2021), Prof. Xu was awarded the 2019 ISE Zhaowu Tian Prize for Energy Electrochemistry. He received his PhD from Lanzhou University, Institute of Physics at the Chinese Academy of Sciences in 2008 with a period as an exchange student in Materials Chemistry at Brown University (2005-2007). Prof. Xu worked as a research associate at the State University of New York at Binghamton from 2007-2009, followed by a postdoc at the Massachusetts Institute of Technology (2009-2012).

Interested in presenting in the ECS Webinar Series? Email your presentation title and abstract to education@electrochem.org for consideration.