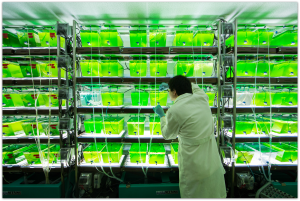 The scientists modernized the “factory” by updating the carboxysome, a particularly complex BMC that requires a series of interactions involving at least six gene products. The result is a metabolic core that takes CO2 out of the atmosphere and converts it into sugar. To streamline the process, the scientists created a hybrid protein in cyanobacteria, organisms that have many potential uses for making green chemicals or biofuels.

“It’s comparable to making coffee. Rather than getting an oven to roast the coffee beans, a grinder to process them, and a brewing machine, we’ve built a single coffeemaker where it all happens in one place,” said Gonzalez-Esquer. “The new tool takes raw material and produces the finished product with a smaller investment.”

PS: Head over to the Digital Library to find out more about biofuels.