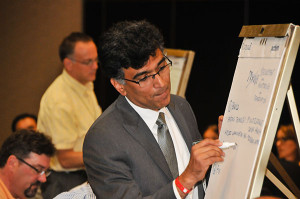 Plenary session
Facundo Almeraya Calderón, President of Sociedad Mexicana de Electroquimica, welcomed everyone on behalf of SMEQ and ECS, noting that over 2,000 attendees were on hand for this the 226th meeting of ECS, the 7th meeting of the ECS Mexico Section, and the 29th Congreso for SMEQ. ESC President Paul Kohl also welcomed the crowd and was the master of ceremonies for the awards presentations, which included 10 different awards and 41 winners. 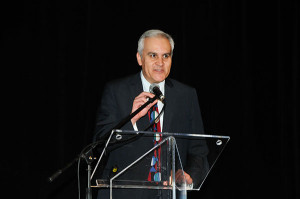 The ECS Lecture was given by Dr. Victor Gerardo Carreon Rodrigues

Advances in Science, Technology and Innovation (STI) in Mexico was the title of The ECS Lecture given by Víctor Gerardo Carreón Rodríguez, Director Adjuncto de Planección y Cooperación International. He explained how Mexico’s goal is to develop the capabilities to transition toward a knowledge-based society and economy by contributing to the growth of the national investment in STI, developing and strengthening highly qualified human resources, strengthen regional development, promoting exchange between academic research and the economic sector, strengthening scientific and technological infrastructure, and strengthen the STI capacities in biotechnology.

Award highlights
The Charles W. Tobias Young Investigator Award is given to a young scientist or engineer who has produced outstanding scientific and/or engineering work in fundamental or applied electrochemistry or solid-state science and technology. The award is named in memory of Charles Tobias, the 69th ECS President, who is considered the Father of Electrochemical Engineering. 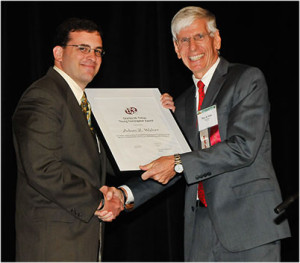 This year’s winner was Adam Weber, staff scientist of Lawrence Berkeley National Laboratory, for his research leadership that furthered the understanding of transport in electrochemical systems through the use of mathematical modeling and advanced diagnostic techniques. Dr. Weber presented his award-winning address entitled “Understanding Transport Phenomena in Polymer-Electrolyte Fuel Cells” at the meeting.

The Edward Goodrich Acheson Award was established for distinguished contributions to the advancement of any of the objects, purposes, or activities of ECS. The 2014 Acheson Award went to Ralph Brodd, President of Broddarp. Dr. Brodd is an ECS Past President and an ECS Honorary member. Dr. Brodd was honored for his exceptional service to the Society, and for inspiring leadership in the innovation, commercialization, management, and public service activities based on the electrochemistry of batteries.

ECS Chapter of Excellence Awards went to the University of Maryland and the Valley of the Sun Student Chapter, which is comprised of students from several schools in central Arizona.

The Outstanding Student Chapter Award went to The University of Texas at Austin.

There were eight ECS Divisions awards:

The ECS Service Award went to both Christina Bock, for her service to ECS as Treasurer, and to Past President Tetsuya Osaka. 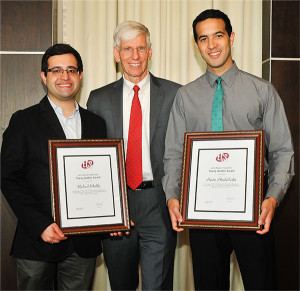 The Norman Hackerman Young Author Award for the best paper published in the Journal of  The Electrochemical Society for a topic in the field of electrochemical science and technology went to Rahul Malik and Aziz Abdellahi for their paper, “A Critical Review of the Li Insertion Mechanisms in LiFePO4 Electrodes.”

The Bruce Deal and Andy Grove Young Author Award, newly established in 2013, was presented for the best paper published in the ECS Journal of Solid State Science and Technology, for a topic in the field of solid state science and technology by a young author to Konstantino Spyrou for his paper, “Hydrogen Storage in Graphene-Based Materials: Efforts Towards Enhance Hydrogen Absorption.” 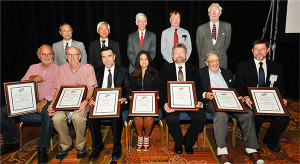 2014 ECS Fellows at the meeting in Cancun, Mexico

Daniel Scherson, ECS Senior Vice-President assisted with the introduction of the 2014 Class of Fellows. These members are being recognized for contributions to the advancement of science and technology, for leadership in electrochemical and solid state science and technology, and for active participation in the affairs of The Electrochemical Society:

George Blomgren: Among his major accomplishments, Blomgren helped to develop an industry leading battery for high power applications such as power tools.

Gerardine Botte: The Ohio State University professor is the inventor of 18 US patents and 29 pending applications.

Jay W. Grate: As a pioneer in the development of polymer-coated vapor sensors, Dr. Grate developed his signature contribution of a systematic understanding of vapor-polymer interactions as they relate to sensor selectivity.

Dirk M. Guldi: Regarded as one of the world-leading scientists in the field of charge transfer/nanocarbons, Professor Guldi is known for his contributions to the area of nanostructured thin films for solar energy conversion.

Bruce Parkinson: With his research covering a wide range of areas, Professor Parkinson has more than 210 publications in peer-reviewed journals and holds 5 US patents.

Fred Roozeboom: Noted for his work in Li-ion microbatteries, Dr. Roozeboom received the Bronze Award of the ‘NXP Invention of the Year 2007.’

Alvin Salkind: Dr. Salkind is most recognized for being the first to build a battery into an x-ray port tracking structure with state of charge.

Michael M. Thackeray: Among his many achievements, Dr. Thackeray is recognized for his contributions to the design of composite electrode structures for lithium-ion batteries.

Tooru Tsuru: Throughout his career, Professor Tsuru has helped advance corrosion research and developed understanding based on electrochemistry principles.

Jose H. Zagal: After being awarded the Presidential Chair in Science in 1996 in Chile by Nobel Laureate Rudolph Marcus, he was appointed member of the Superior Council of Sciences by the President of Chile. 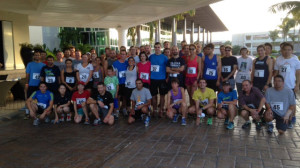 The 2nd “Free the Science” 5K in Cancun.

5K Run-For-Fun
The Free the Science 5K winners were Matthew Lawder and, the fastest woman finisher, Rava Mohtadi. Matthew won the race at the last meeting in Orlando, too. He plans to win in Chicago and is taking on all challengers! Proceeds from the event benefit the ECS Publications Endowment.

Student poster contest
The student poster session awards were handed out by ESC President, Paul Kohl. The winners were: 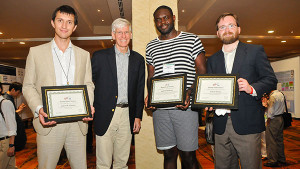 Student Mixer
More than 140 students attended a mixer Monday night thanks to the generous support of Gelest. 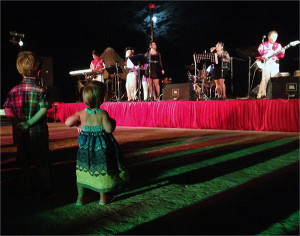 A special dinner/dance party was held on the edge of the Gulf of Mexico on a beautiful Thursday evening. A great crowd danced the night away to a live band.