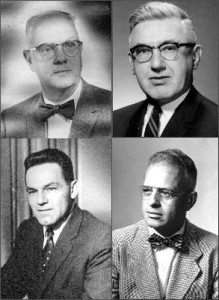 Here in the home office we are not just honoring U.S. Veterans today. As a society with international membership, we are thinking about the men and women who have served their countries around the world.

We couldn’t help but look into how electrochemistry and solid state science might have shaped a soldier’s life.

It turns out, when you are working for an organization that has been around since 1902 and that cuts across so much of our everyday lives, you have enough material to write a book on any one subject.

Here are just a few nuggets:

There are Transactions of the American Electrochemical Society (the name changed in 1930) from WWI. The 29th meeting of the society (our next in Chicago will be the 227th) was held in Washington DC, April 27-29, 1916. One presentation was The Necessity for Water Power Development by Henry J. Pierce. In it he states:

“The two largest and most necessary uses of nitrogen are in connection with the manufacturing of electro-fertilizers and explosives … Modern warfare today means nitric acid. What use are men and guns without powder?”

The 35th Meeting of the Society was held in New York City, April 3-5, 1919. (213 members, 123 registered guests for a total of 336, by the way.) The Meeting’s transactions included The Role Played by Silicon and Titanium Tetrachlorides during the Past War by G.A. Richter. He focused on defense for soldiers:

“The main use to which these chemicals are put in modern warfare is in the production of smoke clouds for concealing or spotting purposes. It is the object of this paper to review the chemical and physical characteristics which make them peculiarly adaptable in this field and to describe the development of the working apparatus which allows their most efficient use in smoke screens.”

Richter notes the above was published with the permission of the Director of Chemical Warfare Service.

World War II presents a few interesting stories. Some member applications during that time were pulled from the filing cabinets and hidden, so as not to fall into the “wrong hands.”

“During World War II, on evenings and weekends, Dr. Read assisted by his wife, Catherine, converted his private metal working shop to military work. This culminated in a part-time participation in the Manhattan Project.“

Could there be a whole Hollywood movie starring George Clooney as Dr. Read in the rest of that story?

As we move up the timeline to modern warfare, the Department of Defense has a stake in solar energy, bio-fuels, algae for bio-fuels, energy storage, waste to energy, ocean energy, micro grids, and soldier power to name a few.

Very specifically, veterans are using technology generated by the likes of our members when it comes to their injuries, like this prosthetic hand that recreates the sense of touch.

Much like our science, our veterans touch many parts of our lives that we never even realize. Please take a moment over the next year to make a point to thank a veteran for his or her service.