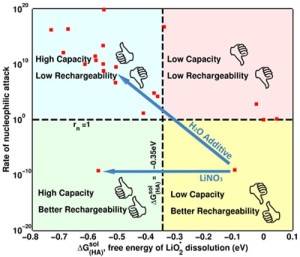 Earlier this year, ECS members McCloskey and Viswanathan teamed up to improve the life-cycle of the lithium-air battery to five times of its current capacity. However, this was accomplished by adding a little bit of water to the battery’s electrolyte mixture, which prevents the battery from being recharged.

The new research, published in Proceedings of the National Academy of Science, addresses that issue.

“Our original idea was to add something to the solvent dimethoxyethane, and so we were initially exploring solvent additives. We found a fundamental problem with the solvent additives: the compromise to rechargeability. Then, McCloskey came up with the ingenious idea of changing the salt instead,” Viswanathan said. “Instead of using just one salt, we decided to blend salts together. We used two salts: lithium bis(trifluoromethane) sulfonimide and lithium nitrate.”

This new research is expected to yield great results for the big battery industry.