Home / Announcements / It’s the “Shark Tank” Treatment for these Scientists

It’s the “Shark Tank” Treatment for these Scientists 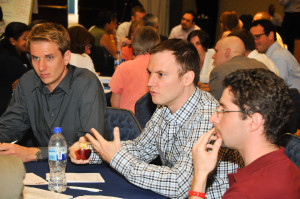 Over 100 researchers were guided through a brainstorming and working group session with the theme of improving access to clean water and sanitation in developing countries.

ECS is awarding $210,000 of seed funding to four innovative research projects addressing critical technology gaps in water, sanitation, and hygiene challenges being faced around the world.

Winners of the first Science for Solving Society’s Problems Challenge:

In-situ Electrochemical Generation of the Fenton Reagent for Wastewater Treatment
Luis Godinez, Centro de Investigacion y Desarrollo Tecnologico en Electroquimica SC, Mexico, $50,000
Disinfection: Study the electro-Fenton approach using activated carbon to efficiently oxidize most of the organic and biological materials present in sanitary wastewater so that recycling of the wastewater might be possible.

More than MERe microbes: Microbial Electrochemical Reactors for water reuse in Africa
Gemma Reguera, Michigan State University, $40,000
Chemical Conversion: Develop microbial electrochemical reactors that harvest energy from human waste substrates using bioanodes engineered to process the waste into biofuels while simultaneously cleaning water for reuse. The microbial catalysts will be selected for their efficiency at processing the wastes, but also for their versatility to process other residential and agricultural waste substrates. This will provide an affordable, easy to operate system for the decentralized processing of a wide range of wastes for improved sanitation, water reuse, and energy independence. 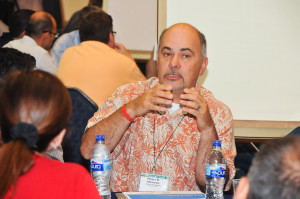 Plamen Atanassov, University of New Mexico, one of the four winners with his concept, Artificial Biofilms for Sanitary/Hygienic Interface Technologies (A-Bio SHIT).

In its first “Science for Solving Society’s Problems Challenge,” ECS partnered with the Bill & Melinda Gates Foundation to leverage the brainpower of the many scientists in electrochemistry and solid state science and technology that regularly attend ECS meetings. The four grantees were identified during a multi-day workshop at the Electrochemical Energy and Water Summit in Cancun, Mexico held October 5-9, 2014.

Over 100 researchers were guided through a brainstorming and working group session with the theme of improving access to clean water and sanitation in developing countries.

Brandy Salmon, Ph.D., Senior Innovation Advisor from RTI International facilitated the brainstorming. “The idea was to inspire researchers to consider the many ways electrochemistry can be applied to solve issues of global significance,” explains Salmon. “ECS provided a lab for collaboration that generated new ideas and partnerships.”

Ideas suggested ran the gamut from turning urine to hydrogen power and using microorganisms that harvest energy from marine sediments to looking at “molecular slip” as part of making waste pipes more efficient. The format provided a unique opportunity for researchers to generate potential solutions and then almost immediately start testing them.

After the brainstorm session, researchers then had two days to develop a one-page pitch. Thirty finalists were selected from the 47 proposals submitted by the end of the second day. Those 30 were given five minutes each in the “Shark Tank” to present his/her idea to a panel of judges followed by five minutes of questions. The funding review panel scored proposals for innovation, collaboration, mission and capacity. The final deliberation and selection concluded the next day.

“This really is science for solving society’s problems,” noted Paul Kohl, ECS President. “An expert, in this case the Bill & Melinda Gates Foundation, presents the problem, ECS gathers ideas from the brightest minds in the field and their peers review the proposals and grant the money in a very short period of time. No red tape. More time will be spent on addressing the problem and less time on raising money.”

“This is true reality programing, a model for moving the needle on real-world problems,” says Roque Calvo, ECS Executive Director. “We would like to replicate this at our future bi-annual meetings, which regularly attract more than 2,000 of the brightest minds in science. We have invaluable assets in our membership; we just need corporations and foundations to identify the challenges they’d like to address, and provide the capital so our membership can start solving additional challenges.” 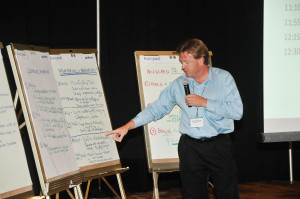 Andy Herring sharing his presentation at the brainstorming session.

The 2014 Electrochemical Energy and Water Summit took place during the 2014 ECS and Sociedad Mexicana de Electroquímica Joint International Meeting which was attended by 2,200 researchers with 51 symposia and 2,299 papers presented.

More information about the speakers from this program.