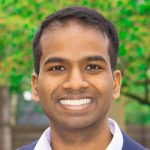 Professor Manthiram answered audience questions during a live Q&A session following his April 20 webinar, “Electrification and Decarbonization of Chemical Synthesis.” He kindly provided written answers to questions not covered during the broadcast (below). The webinar is available to view on the ECS YouTube channel.

Non-dimensionalization is the act of removing units from an equation or collection of constants/variables in order to make them more universal. This allows one to come to conclusions spanning diverse systems across a broad set of length scales. For instance, an electrolyzer tested at lab scale, versus one tested in industry, can have very different dimensions, making it hard to compare their operation. Finding appropriate dimensionless quantities that govern their operation can help make conclusions translatable between devices of very different sizes and operational characteristics.

Your talk does a tremendous job of laying out the opportunities and issues in electrocatalysis R&D, but is it not the scaling issues which will become the issue once electrocatalysts get developed?

How do you want to move forward in terms of Li NRR? Do we need to optimize the electrolyte to suppress hydrogen evolution due to reaction with Li metal?

In NH3 synthesis, you talked about flooding on your counter electrode in H2 oxidation. Have you observed flooding on your working electrode? What parameters play a role in that and how have you managed to prevent it?

Flooding can occur at either the working or counter electrode, especially when a THF-based electrolyte is used with a carbon fiber-based gas diffusion electrode. This flooding occurs because the wetting of carbon fibers by THF is very favorable. As a result, finding materials for which the wetting is less favorable, such as the stainless-steel mesh, was important for achieving higher rates of nitrogen transport and fixation in our system. In addition, we find that controlling the pressure differential across the stainless-steel mesh can also help prevent flooding.

Could you share your vision on the future of Li-mediated NH3 production? Especially the low energy efficiency (2 percent) compared to H-B (60 percent) because of the high Li redox potential—this questions the feasibility of this process for future applications. Also, long-term stability appears to be an issue.

Even though the efficiency is low at present, there is a pathway toward increasing the energy efficiency to higher values, up to a theoretical limit of around 30 percent. Stability certainly remains to be worked out, and there are many lessons that we can take from developments in lithium metal batteries as we try to achieve stability.

How high is your resistance in the cell? I would imagine very high. How does that limit your operation and how could you lower the resistance?

The electrolyte resistance is the largest loss of energy in our system, representing about 70 percent of the energy that we put into the system. The resistance could be lowered by developing new electrolytes or also by reducing the separation between cathode and anode.

Coming from a battery background, I wonder if there are side reactions that deteriorate conversion efficiency over repeated operation.

The electrolyte can decompose in many undesirable ways, including direct reaction with lithium metal and oxidation at the anode. The reaction of solvent with lithium metal to generate a solid electrolyte interphase is something that we describe in our recent work. The oxidation of solvent at the anode can largely be suppressed by introducing hydrogen at the anode, so that it is preferentially oxidized as the ultimate proton source.

What fraction of CO2 emissions from the traditional Haber-Bosch process could be reduced if we use electrogenic H2?

Assuming there is no carbon footprint behind the renewable electricity used to produce electrogenic hydrogen, then about two thirds of the carbon footprint associated with ammonia production could be eliminated.

Why did you choose THF as an electrolyte for electrochemical nitrogen reduction reaction?

Fortuitously, we initially chose THF as an aprotic solvent, which is needed to achieve some degree of stability in the vicinity of lithium metal. In addition, THF has enough polarity to dissociate certain electrolytes that impart ionic conductivity to the solution. In their report on lithium-mediated nitrogen reduction in the 1990s, Tsuneto et al. also used THF, giving it literature precedent.

What is operating current density when reaching 40 percent FE?

We can achieve partial current densities for ammonia of approximately 10 mA/cm2 while maintaining high FEs.