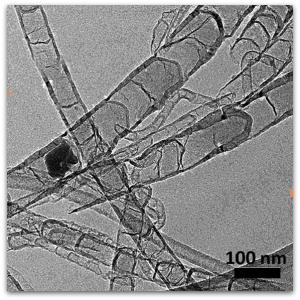 Read the paper in the journal Angewandte Chemie.

This from the University of South Carolina:

If you could add some energy to it, though, you could convert CO2 into carbon compounds that are fuels, not a waste product. In chemical parlance, it’s called reducing CO2 when you convert it to less-oxidized forms of carbon, all of which have actual fuel value. Some single-carbon molecules to aim for would include (in increasing energy content) carbon monoxide (CO), methanol, and methane.

Step in the Right Direction

“We are working in conjunction with other institutions, and they are developing the other side, the water side, using photovoltaics to split water, and eventually we want to couple those two reactions together,” says Zhou. “So one side will be water splitting, generating protons from the anode that travel through the electrolyte to reach the cathode side and then react with carbon dioxide and with incoming electrons to convert carbon dioxide to fuels. Carbon monoxide is one kind of fuel you can produce, and methane and methanol are other fuels that can be produced.”

While this development will not lead to commercialization of the technology, it is a step in the right direction.