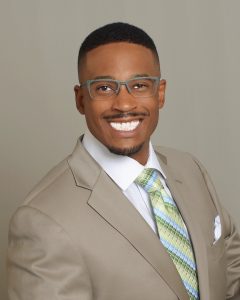 My research focus is inorganic chemical synthesis and characterization of ionic liquids, molten salts, silicon-based compounds, etc. used as separators for ion-conduction in electrochemical devices such as batteries for energy storage and fuel cells for energy generation. This has paved the way for me to be a coinventor with my advisor, Dr. C. Austen Angell, for an issued patent for a novel electrolyte in H2/O2 fuel cells and another patent pending for a nonflammable, solid electrolyte for potential purposes in Li-ion batteries back in 2017. More recently, I’ve accepted a new postdoc role for an opportunity to spur a collaborative effort with the U.S. Naval Research Lab (NRL). I’ll be executing a new research focus to utilize ionic liquids for hydrogen and oxygen storage capacities to supply evolved gases to fuel cells to power unmanned underwater vehicle (UUV) prototypes.

My past electric bike company, Southwest Battery Bike Co., was recognized as “Small Business-of-the-Year in District #27” for 2016, conferred by Arizona State Representative Reginald Bolding. I’ve completely reinvented my company from the old shop into a new firm, S.T.E.M. Chemist Consulting, L.L.C., with a specialized focus on the present and future uses of renewable energy power sources that encompass all types of electric vehicles (EVs). As a small business owner, I’ve given seminars concerning the power of entrepreneurship as a scientist for doctoral students, and have been invited to give a similar talk to fellow postdocs at the National Institute of Standards and Technology (NIST) later in 2019.

During my final years as a doctoral student, I gathered my core cohorts to establish a graduate student chapter of The Electrochemical Society. The ECS headquarters leadership at the time directed me to Dr. Candace Chan, an associate professor at ASU (and later our chapter advisor), who was spearheading the charge to rejuvenate the ECS Arizona Section. I became the founding president/chair of the ASU graduate student chapter, the ECS Valley of the Sun (Central Arizona) Student Chapter, then I discovered that we established the first chapter ever in the entire state of Arizona. We had events revolving around an ECS journal club, a patent law speaker presentation, science at the museum, connecting with fellow members at the University of Arizona, judging at the Arizona statewide K-12 science fair poster competition, and much more. I created other interactive sessions such as making homemade batteries, using solar panel kits, mixing chemicals to make magnetic slurries called ferrofluids, and riding electric bikes. These sessions were supported by the ASU members of our newly formed ECS chapter, which was a significant contribution toward us earning a slot as an ECS Chapter of Excellence in 2014. I myself was first exposed to H2/O2 fuel cell race cars when I volunteered for an outreach session presented by the ECS Industrial Electrochemistry and Electrochemical Engineering Division chaired by Dennie “Dr. Electro” Mah. This was a local outreach session at Bioscience High School during the 213th ECS Meeting in downtown Phoenix, AZ.

My aim is to prepare the next generation with these innovative advancements in electrochemistry for electronic devices that are burgeoning in the energy sector by offering exciting, hands-on activities—therefore demonstrating that electrochemistry is not only cool but also an achievable career in the immediate future.

Currently, I’m in the process of creating an interactive, accelerated STEM program for local K-12 students focused on exciting educational activities that are the basis of the latest in innovation to encourage students to select a STEM-focused major at the collegiate level. One opportunity will include providing a fuel cell workshop to upcoming high school seniors at the HBCU (Historically Black Colleges & Universities) Alliance in Washington, DC, facilitated by Dr. Jeanita Pritchett, as we both are alumni from Tennessee State University, an HBCU, and general body members of NOBCChE (National Organization for the Professional Advancement of Black Chemists and Chemical Engineers). My aim is to prepare the next generation with these innovative advancements in electrochemistry for electronic devices that are burgeoning in the energy sector by offering exciting, hands-on activities—therefore demonstrating that electrochemistry is not only cool but also an achievable career in the immediate future.

For over seven years, I have participated as the STEM coordinator for a local K-12 youth initiative called the Ironmen Network for adolescent men based in central Phoenix. I was the youngest life coach when the program was established in 2010. I have a sense of duty to pay it forward and make it a point whenever able. I personally was in plenty of similar outreach programs growing up and see myself in many of the young men’s faces. I vividly recall being in their shoes seeking a mentor for guidance while in grade school. I believe it would be an absolute disservice of me to live in the community and not share some of my scientific expertise plus college life experiences to the neighborhood kids of our Eastlake Park village in central Phoenix. I initially start with an eye-opening, yet relatable interpretation of the scientific method. For example: Life is a lot like a lab notebook. Come up with a goal (hypothesis), see what you’ll need to make it happen (materials), execute the plan (protocol), use what works from experience to strengthen your skill sets (observations), learn from your mistakes (experimental errors), reap the rewards (results), seek guidance from mentors (discussion and conclusion), then, importantly, continue to push forward (future direction).

Life is a lot like a lab notebook. Come up with a goal (hypothesis), see what you’ll need to make it happen (materials), execute the plan (protocol), use what works from experience to strengthen your skill sets (observations), learn from your mistakes (experimental errors), reap the rewards (results), seek guidance from mentors (discussion and conclusion), then, importantly, continue to push forward (future direction).

Afterward, I tell them my story of playing varsity football and being scouted by NCAA Division II colleges, then finally graduating from Sierra High School with a subpar GPA of less than 3.0. I am the son of a soldier; I’ve had the opportunity to traverse the globe, living in Germany, Finland, Mexico, and born in the United States (Fun Fact: My entire immediate family was born at U.S. Army bases in Germany except for me), yet even experienced a brief duration of living in a homeless shelter at a young age when visiting my father. I’ve experienced the financial challenges of being raised mostly by a single parent, yet a very strong mother, and her devotion to her sons—making sure my brother and I were compelled to complete our college educations, then break degree-binding barriers in the workplace and shatter stereotypes in our respective communities. [Note: African Americans make up only 2% of granted doctorates in chemistry, and more specifically, of that, less than 1% are to the men, according to National Science Foundation (NSF) 2017 data reports.] This was our mother’s personal goal as an African American woman who persevered through hardships, determined to succeed, and beating the odds. We witnessed firsthand her going to night school for almost a decade to earn her bachelor’s degree, then going back to school to complete her master’s along with numerous certifications over the years. She’s truly an inspiration and planted in me this idealism, now instilled as my own beliefs, to be a continual lifelong learner as well. 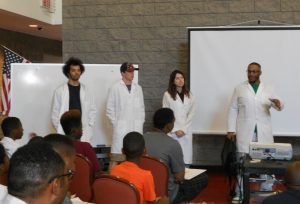 Telpriore “Greg” Tucker (far right) and other members of the ECS Valley of the Sun (Central Arizona) Student Chapter (left to right: William Bowman, Tylan Watkins, and Iolanda Klein) performed community outreach to the Ironmen Network in Eastlake Park of central Phoenix in 2013.

Additionally, I’ve participated in various outreach events such as the AZ Sci-Tech Fest at Embry Riddle Aeronautical University in Prescott, AZ, and the STEM Summit hosted by the Urban League Young Professionals under the leadership of Sasha Simmons at the Microsoft Center in downtown Tempe, AZ. I’ve collaborated with a variety of partners with the same mission of teaching K-12 students the fundamentals of electrochemistry and practical applications in the electric transportation sector. Now, almost a decade after I forecasted my mission, there are new, innovative companies actively planning to build manufacturing plants throughout the state of Arizona to produce electric vehicles that are finally capable of efficiently using renewable power sources such as battery packs and fuel cell systems to create a more cost-effective and sustainable marketplace.

This has brought more widespread attention to my fuel cell research and STEM outreach efforts in the community where I was officially dubbed “The Visionary” in the Valley of the Sun and honored in the inaugural PHOENIX magazine 40 Under 40 for 2018. I’ve ventured outside the lab setting and developed partnerships in the entrepreneurial sector with other like-minded, progressive thinkers—for a prime example, with a cinematographer and now good friend, Director Brian Watson of Black River Life Studios. My local endeavors were documented and produced into a short film just announced to release at a national film festival. S.T.E.A.M. City with Dr. T will debut in spring 2019, showcasing my spin on science as an electrochemist. I’ve been doing my outreach in the southwestern region of the country to further highlight the importance of being a champion for conveying chemistry to your community, to your nation, to our planet, and beyond.