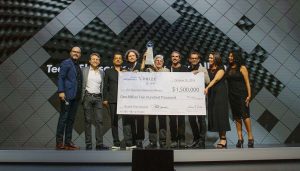 It’s not unheard of for fundamental human necessities—shelter, food, and water—to not be met in certain parts of the world. Whether a result of poverty, political turmoil, geography, limited resources, or all of the above, it remains a struggle for many. However, a team of sustainability experts in California may be closer to solving one of those problems.

The Skysource/Skywater Alliance won a well-deserved $1.5 million prize for their work. The prize, known as the Water Abundance XPRIZE, was awarded by XPRIZE, a California nonprofit that runs competitions aimed at creating solutions for the world’s problems.

One of the leaders of the Skysource/Skywater Alliance, David Hertz, says he’s excited to see the outcome of the machines and its benefits to those struggling with clean water scarcity.
The Skywater machines work as an atmospheric water generator that can condense water vapor from the atmosphere and turn it into drinking water. They can be powered by solar energy or the burning of biofuels.

Hertz estimates there’s about “37.5 million billion gallons of water” in the atmosphere at any given time, which Skysource says is more fresh water than in all the rivers on Earth. The sky is the limit for the team.

Drinking water crisis’s like that of Flint, Michigan, and others, has encouraged similar projects like the Science for Solving Society’s Problems Challenge, an ECS and Bill & Melinda Gates Foundation partnership, where over 100 researchers worked together to apply electrochemical processes to technical gaps in existing projects; the winners receiving a total of $360,000 towards their projects.

Luis A. Godínez, a researcher at the Centro de Investigación y Desarrollo Tecnológico en Electroquímica and a winner of the Science for Solving Society’s Problems Challenge, discussed his lecture, “Electro- and Photo-Electro-Chemical Generation of the Fenton Reagent. Some Approaches for the Development of Electrochemical Based Advanced Oxidation Processes for Water Treatment,” at AiMES 2018, focusing on water management and the technological potential of the electro-Fenton approach. Godínez work focuses on the need for inexpensive, efficient, and accessible water treatment for the disinfection of water for the 2.6 billion people worldwide without access to sanitation services.