The Advantages of Studies with Short Titles 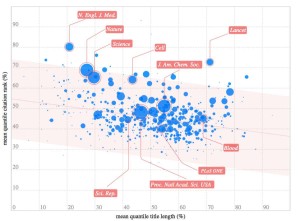 As title length increases, the number of citations typically decreases.
[Click to enlarge]

With the use of technical terms and complex formals, scientific journal articles are typically a difficult read for the non-expert. However, sometimes scientists themselves also have a difficult time wading through the highly complicated terms in these studies.

The analysis began by looking at 20,000 of the most highly cited scientific papers published from 2007 to 2010. Each year consistently showed that papers with shorter titles received more attention.

The situation gets more complicated, though, when you take journal rankings into account. Papers published in more prestigious journals tend to get more citations. Once the authors controlled for that factor, the correlation between shorter titles and higher citations only held up for the years 2007 to 2010. But the results do show that, overall, journals that publish papers with shorter titles tend to receive more citations per paper.

END_OF_DOCUMENT_TOKEN_TO_BE_REPLACED

Imagine a world where anyone—from the student in Atlanta to the researcher in Port au Prince—can freely read the scientific papers they need to make a discovery, where scientific breakthroughs in energy conversion, sensors or nanotechnology are unimpeded by fees to access or publish research.

At ECS, that is our vision of the future. We’re working to provide open access to all ECS publications, while maintaining our high standards of peer-review and fast delivery of content.

Please help us make this vision a reality by
making a tax-deductible donation to ECS today.

Your donation fosters the growth of electrochemistry and solid state science and technology by supporting ECS publications and the participation of scientists from around the world at our biannual meetings.

Through travel grants and reduced fees, ECS enables the participation of young scientists and students who otherwise might not be able to attend an ECS meeting. This is particularly important as the work of these scientists, and all ECS members, increasingly holds the keys to solving global challenges in energy, waste and sustainability.

Please help us continue the important work of ECS by donating today.

Thank you again for your incredible work and continued support.