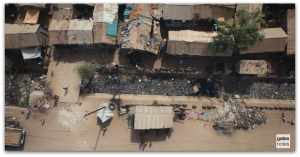 
“The real world introduces lots of variables,” Gates writes in a blog post. “For example, you have to find the right personnel to run the machine. You have to work with local and national governments and gauge the public’s reaction.”

The team is already looking to improve the next generation of the OmniProcessor based on the variables they’ve already encountered. For example, Gates would like the next version to burn garbage in addition to human waste.

Critical technology gaps in water, sanitation, and hygiene are being faced around the world. More than 738 million people world-wide rely on unimproved drinking water sources.

In Dakar alone, sanitation quality is deteriorating with 1.2 million people using pits to dump fecal waste. These pit latrines make the community more susceptible to a host of different diseases and pathogens.

With the OmniProcessor, the people of Dakar are working toward turning one man’s trash into another’s treasure.

In 2014, ECS awarded over $200,000 of seed funding to encourage research in the areas of hygiene and sanitation. In its first Science for Solving Society’s Problems Challenge, ECS partnered with the Bill & Melinda Gates Foundation to leverage the brainpower of the many scientists in electrochemistry and solid state science and technology that regularly attend ECS meetings.