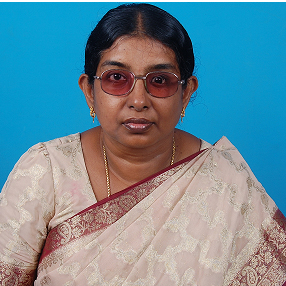 Sheela Berchmans has been an ECS member since 2012 and member of the Organic and Biologic Division and India Section since 2019. Berchmans’ areas of expertise include microbial fuel cells, nanomaterials for sensor applications, bio-assisted synthesis of metal nanoparticles, and electrocatalysis. Read her past work, available now in the ECS Digital Library.

Follow the latest research on electrocatalysis at the 235th ECS Meeting taking place on May 26-30, 2019 in Dallas, TX.

Electrocatalysis assumes a special importance as the applied potential at the electrified interface provides a tunable ∆G to the rate component. ∆G consists of a chemical and a electrochemical component (e-∆G0/RT e-F∆/RT), where the electrochemical component provides a leverage to control the rate of reaction. For simple nonbonding reactions, the rate of the reaction can be expressed as a function of work function of the metal catalyst. However, when bonding reactions are concerned, the adsorption of the reactants at the electrode surface determines the rate of the reaction. For eg, we take into consideration, Hydrogen evolution reaction, (HER) a typical prototype of electrochemical reaction.

The following reaction steps determine the rate of the reaction. The first step involves the proton discharge on the electro catalyst (Volmer reaction) which desorbs either through an electrochemical desorption (Heyrovsky reaction) or chemical desorption from the electrode surface as H2 gas. (2nd and 3rd steps) This reaction is known to be highly exothermic in nature.

According to Sabatier’s principle, with increase in heats of adsorption, the reaction passes through a maximum and decreases. It was Trasatti who first constructed a volcano plot for HER. Schmickler, proposed a theory that a good catalyst follows Sabatier’s principle at equilibrium potential in addition to having d band that spans the Fermi level and a long-range interaction between d band level and Hydrogen 1S level. However, he adds that it would be difficult to find points on descending side of volcano plot due to the existence of more than one adsorbed intermediates with different adsorption energies (for example upd states and opd states). His discussion did not include oxide covered metals.

Apart from heats of adsorption, other parameters like work function, latent heat of sublimation, latent heat of melting, lattice constants can also be correlated to the rate constant of the reaction. Bockris provides an interesting account of ethylene oxidation and explains how Pt occupies the maximum position in the volcano plot. He could show either M-H bond strength, or lattice heat of sublimation can be correlated to the rate of the reaction leading to a volcano plot.

Other reactions that needs an exhaustive study of reaction rates and comparison of catalysts should be oxygen reduction as it is a kinetically sluggish reaction. More concern needs to be given as the reaction is inherently sluggish compared to H2 adsorption which is exothermic in nature.

Norskov and co-workers have carried out DFT calculations related to oxygen reduction and shows the existence of volcano plots for oxygen reduction reaction (ORR) on various transition metals and noble metal catalysts. The kinetics of oxygen reduction was observed to proceed through proton/electron transfer through adsorbed oxygen and hydroxyl intermediates which are found to be very stable at potentials close to equilibrium. A volcano plot like trend is observed over a wide range of transition and noble metals based on the database of calculated oxygen and hydroxyl adsorption energies. Efforts are continuously made to replace Pt which is prohibitively costly. In this direction, many oxide materials are being evaluated as alternative catalysts for ORR. Yang Shao-Horn etal have demonstrated that the ORR activity for oxide catalysts primarily correlates to σ *orbital (eg) occupation and the extent of B-site transition-metal–oxygen covalency, which serves as a secondary activity descriptor. These authors explain a volcano trend in the oxide ORR activity with eg level filling.

Recent interest in the 2D catalytic materials has motivated the researchers to revisit the behaviour of wide range of catalysts to show a volcanic plot like trend with some properties/descriptors of the catalyst. Zhenhai Xia etal, established a descriptor and design principle to exactly foretell the HER electrocatalytic activities of heteroatom-doped graphitic carbon nitride g-C3N4. The new descriptor which is based on the dopant and its bonding environmental information, provides a better direction to the rational design and screening of high-performance catalysts. A “volcano” trend between the descriptor and the electrocatalytic activity has been established, which provides information about the most active dopant elements and related structures.

Apart from these examples, outer sphere electron transfer with ∆G also shows a similar volcanic trend. According to Marcus’ theory a plot of the reaction rate versus the reaction free energy ΔG should pass through a maximum when ΔG ≈ −λ, where λ is the energy of solvent reorganisation of the reaction, and decreases for more exergonic reactions. The descending part is known as the Marcus inverted region.

Marc T.M. Koper has demonstrated that the reaction rate for the proton-coupled electron transfer reactions shows a volcano type trend as a function of pH. In these reactions proton and electron do not transfer simultaneously and a pH dependence of the overall reaction rate is expected. If an acid–base equilibrium is part of the mechanism, the optimal pH occurs close to the pKa of this equilibrium.

Kai S. Exner has recently shown how a similar type of volcano plot could be obtained for Li battery reactions

Real life situations can also be correlated to similar type of volcanic or inverted U plots as discussed by Malcom Gladwell in his book on “David and Goliath”. He illustrates two examples of classroom size vs learning rate and wealth vs bringing up children. If the classroom size (no of pupils) is small there will be sufficient discussions and learning rate will improve. If classroom size is bigger, only discussion will happen and the learning rate will decrease. If one is wealthy, the children can be brought up in a better way. However, too much of wealth is not good for child rearing.

Hence the volcano plots are not significant to electrocatalysis alone. We can also correlate to real-life situations.