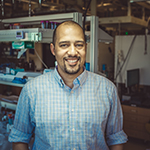 Fikile Brushett is an Associate Professor in the Department of Chemical Engineering at the Massachusetts Institute of Technology (MIT). Brushett is especially interested in the fundamental processes that define the performance, cost, and lifetime of present-day and future electrochemical systems. His research approach combines synthesis and characterization of redox-active materials, design and engineering of electrochemical reactors, and techno-economic modeling of electrochemical systems. He places a strong emphasis on connecting system-level performance and cost goals to materials-level property requirements, and on leveraging this knowledge to guide the exploration of new chemistries and reactor formats. Ultimately, Brushett aims to develop robust and transferable guiding principles for the design of materials, processes, and devices that harness electrochemical phenomena. His group currently works on redox flow batteries for grid storage and on electrochemical processes for carbon management and chemical manufacturing. He also serves as the Research Integration co-Lead for the Joint Center for Energy Storage Research, a DOE-funded Energy Innovation Hub.

He received his BS in Chemical and Biomolecular Engineering from the University of Pennsylvania in 2006 and his PhD in Chemical Engineering from the University of Illinois at Urbana-Champaign in 2010 under the supervision of Professor Paul J. A. Kenis. From 2010-2012, he was a Director’s Postdoctoral Fellow in the Electrochemical Energy Storage Group at Argonne National Laboratory under the supervision of Dr. John T. Vaughey. In 2012, he began his independent career at MIT where his research group seeks to advance the science and engineering of electrochemical technologies that enable a sustainable energy economy. 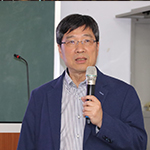 Prof. Kuo received a PhD in Engineering Science from Columbia University. He has a distinguished record of accomplishment in advancing solid state science and technology. His research resulted in breakthroughs that solved some long-term problems in industry, and his inventions are used in worldwide productions. He has received many awards and honors, including ECS Fellow, ECS Gordon E. Moore Medal, ECS Electronics and Photonics Division (EPD) Award, 10 IBM awards, and many global university, industry, government, and professional awards. He is also a Fellow of IEEE, American Vacuum Society, and Materials Research Society. He served on advisory and review boards, and panels for U.S. National Academies, industry, universities, and governments.

Prof. Kuo served as ECS President (2018-2019) and EPD Chair, and on ECS journal editorial boards, and many committees. He founded the world’s longest continuous ECS Thin Film Transistors (TFT) Symposium series (held for 32 years) and the Semiconductor Technology for Ultra Large Integrated Circuits (ULSIC) vs. TFT Conference series (held for 14 years). He has consulted for semiconductor companies and advised students in many countries.